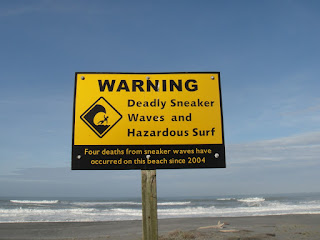 We have "sneaker wave" warnings up all along the Oregon coast for beach walkers to be aware of, out in the blue water there are monster swells and rogue waves to fear. I think we need to define "wave" vs. "swell" . . . waves crown like in the image below, swells are clean, more like tidal rushes. 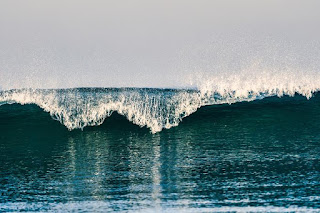 We just recently experienced our first "Sneaker wave" at the beach by Heceta Head Lighthouse, Low tide was at 1135, we were there on the surf line at 1130, the tide line was out perhaps 225 lineal feet from the high tide marks. We were all the way out when a single swell (not a breaking "wave") came in to run and run the full length of the beach all the way up to the parking lot, had we stayed standing at the low tide mark, we would have been 6-8 foot under water. It was a one surge-wave and back to normal.

The typhoon wave was a one-hit and gone 65 footer that removed sponson decks like key-rolling open an anchovy can, and deep-sixed a 30-ton 30 foot X 30-foot elevator, and took a "lot" of tied down equipment, on a 1200 foot Aircraft Carrier.

Working from the open upper bridge, I saw it appear on the horizon, like nothing I had seen before, scary-even unbelievable; after determining this was not a visual abberation, trying to come up with an evasive plan was simply not in my experience locker.

This "type" of swell-wave, but, much larger

I was unable to determine its height, but it was coming fast . . .  and blocked visibility of knowing what was behind it. I am recalling a 4 or 5-minute time span sighting-to-impact, making its approach speed around 50 or so MPH.

This single screw 20 knot steel boat had huge typhoon side hatch weather panels (that were closed!), and a Portuguese bridge (which saved us), I can remember sounding the siren, going to full throttle 0 degrees, and heading down to the lower bridge, the 12 man foreign crew was in the galley unawares, once in the pilot-house, the English speaking fish captain jabbered a short something on the PA/intercom, and we stared a mile in front of us at a 50 foot high solid blue 75-80 degree wall of water closing fast.

We were turned head-in, and seemingly were going to drive "through",  rather than go up and over it . . .  it never broke like a wave, but stayed as a solid wall-of-water swell.

As I stepped back from the wheel I looked up and determined the 50 foot height (referencing the dock warehousing roofs back in port), we shook or quivered then became engulfed (wrapped up) in blue water and darkness as we dove in, and then went harshly bow-up to some ugly angle (45 degrees ?) that left us staring upward lying on the aft-bulkhead and weightless, there was a loud growl followed by an extremely hard cherry-bump landing and it was over.... it was a feeling similar to kicking the blocks out on a new boat commissioning stern launch and riding in from a high dock.

We were still upright and never yawed, but ended being knee deep in receeding water (in the pilothouse), fortunately, there was nothing more behind that wave, we did not spring any hull plates,  bust glass, lose our power or steering, and no crew was lost, miraculously, we only had two seriously injured.

Our sister-ship was almost line-of-sight, 10 miles behind us on the same course and thought we were joking, the wave disbursed before ever reaching them.

But "this" sea trial was over, there was a small fire and a great amount of mostly electrical damage (but, nothing structural, or to tankage) the skiffs and gear were not aboard, and only the radar and bimini cover were lost.

The foreign fish captain and I were the only above-deck witnesses to the entire event, luckily we had left the skiffs and deck gear back at the yard.
There was absolutely no skill involved in this crossing, 18 minutes of pre-event angst, a 20 second event, and a after-life of memories, it was all luck, pure luck.