Here aboard So...fea we are probably 75% Fishatarian  . . . we got that way being
cheapskates (no ocean pun intended), working fish harbors and sea ports most of our
adult lives meant "by-catch" aplenty always coming in on the boats daily, during my
afternoon/evening dock rounds everything from Spiny lobster to eel,  fish of
undeterminant breeds to Abalone, or, a generous hank of a Captain's "take-home"
family fish was always shared.


Taking a random type of fish home that is free, is one thing, going out to a restaurant or

fish market and "paying" for fish is different, you want what you paid for, being fish
familiar, we have caught some pretty prestigious people lying about what they are
selling. wrong shape, wrong color, wrong size, and wrong taste... did I mention wrong
price ? and sometimes even an endangered species to boot.

Growing up on fresh water fish (Pike, Crappie, Bass, and Catfish),  once I met ocean
Cod, Tuna, Sword fish and Salmon, I was hooked (pun intended), eating fish and
seafood full time means it is no longer a delicacy to us, it is a staple, but, most all of
the product we eat is not even US caught !  here are some thoughts.... 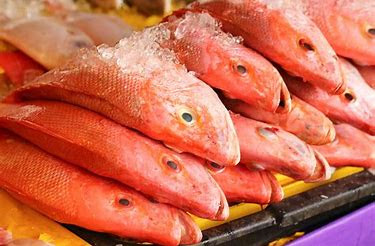 US fisherman are a dying breed, similar to coal miners, loggers, and steel workers.
We need to support the few we have left from Asian encroachment and price wars.
A big impact of both is Fish Fraud-Counterfeit Fish, ripoffs, and name substitutions.

One of the ecology groups I belong to, Oceana, took samples of "labled" fish from
1,200 markets in 21 states across the United States and genetically tested them,
every - yes, every - sushi restaurant tested served imposter fish, and 33 percent of the
fish nation-wide were mislabeled.

Fish labeling  standards compare with  examples from the natural foods industry, and
one must ask, what really constitutes “organic” versus “local” versus “natural” and
what is "wild"?
One of the biggest  offenders was Grouper—or, more accurately, the 66 varied species

of fish that the FDA legally (and confusingly) recognizes as falling under the loose term
"Grouper," then, Fish markets pass off over 400 "other" species as "Grouper", including
Asian Catfish, Perch, Bream, Weakfish, and King Mackerel.
Over 100 studies  performed in 29 countries, on all continents, showed massive fish
fraud, which was most prevalent in both breaded and filleted seafood (products where
the only tool that can make sense of anonymous fish meats is the expensive DNA
sequencing.

DNA sequence will be super evident, but DNA sequencing takes at least 12 hours.
methyl mercury testing were trying to pass off Swordfish from Uruguay as Whitefish,
and were fined.


The inspections and violations go on endlessly, but, you get the idea. . .   sometime in
the future, (as a part 2 of this tale), we will look at our Northwest fish . . .  Cod, Salmon,
Tuna, and Halibut specifically, watch for it.