We grew our wheat and released it to the river this AM, (Boznici pesnica) 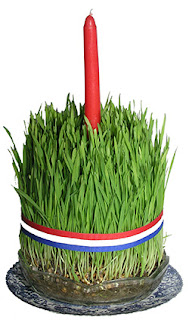 32 degrees last night, fourth night of chill-meaning the hull is getting "cold-soaked" time to fire off the engine room heater to keep the core warm, had a 5 minute hail storm last night ! preceeded and followed by absolute calm/dry/cold.  Pretty bitter wind chill,  blue skies and sun.

A fire broke out in one cargo container on the Yantian Express, a 7,510 TEU container ship, about 1,500 kilometers southeast of Halifax, NS. The fire spread to adjacent containers. The firefighting tug, Smit Nicobar, arrived Friday evening but weather conditions limited what the tug’s crew could do to fight the fire, she was de-crewed and is adrift still burning.

MSC Zoe is one of the largest container ships in the world with a capacity of over 19,000 twenty foot containers. Nevertheless, when Storm Zeetje pounded northern Germany with gale force winds late on Tuesday night, 277 containers were washed off the huge ship in the Wadden Sea. Some of these containers or their contents were carried onto the beaches of five West Frisian Islands islands including Terschelling, Vlieland and Ameland. At least one lost container was loaded with toxic chemicals. The Netherlands deployed 100 troops to help in the clean up and to search for dangerous cargo.

The car carrier Sincerity Ace, built in 2009, has a capacity for 5,221 passenger cars. is on fire and abandoned in the mid Pacific  1,800 nautical miles northwest of Oahu. The ship was en route from Yokohama to Honolulu, and was then scheduled to call Mazatlan, San Juan, Port Canaveral, Jacksonville, Newport News, Baltimore, Newark, Baltimore, Charleston and Brunswick before returning to the Far East via Namibia and South Africa. She is being considered a total loss, as are  her automobiles.

Back to the computer work ! and staying aboard-warm !