Unannounced Craaazy wind-storm overnight,  from the South and abeam causing us to broach-roll in a rapid cyclic from 2300 to 0400, like being on a tin can escort. 40 degrees,  overcast, with VERY heavy hard rain squalls.
Our Harbor Grebe population has it all... of the 20 types of grebes, from the largest long necked Western Grebe to the smallest,  tail-less Pied bill grebes, the small guys are the fastest swimmers you will ever see, some 70 mph...fun to watch...
grebes cannot go ashore (possibly they can stumble a foot or so to a nest), and many types cannot fly at all... they are "divers". 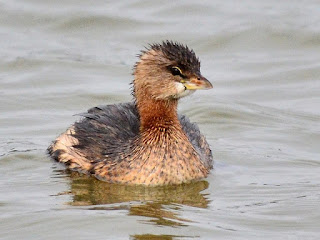 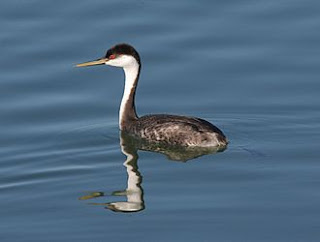 A PeterB Note:
If you are unfamiliar with bunker fuel, the name comes from the old dock term for an onshore storage tank...   fuels for boilers and engines range from lightweight alcohol, to gasoline, then to the heavier diesel fuel/stove oils like jet fuels (#1, 2, and 3), but,  lower on down the chain are "bunker fuels"  #4, 5, 6, 7 diesel bunkers  and #8 fuel oil bunkers....  #8 is similar to an almost non-pourable tar.  (Heavy bunkers must be cut with lighter weight fuels or heated to a liquid form in order to be pumped or used.)