The U.S. Coast Guard is convening a formal marine casualty investigation into the loss of the fishing vessel Mary B II, which capsized off Newport, Oregon this month resulting in the loss of three lives .

On January 9, 2019, crew of the 42-foot fishing vessel, Mary B II, were attempting to cross the Yaquina Bay Bar during heavy weather when the vessel capsized with all three crew members on board.  (SEE OUR 10 JANUARY BLOG PAGE)  Following the incident, the Coast Guard reported that prior to the accident the crew of the vessel had requested a Coast Guard escort across the bar, but before the escort could reach them the fishing vessel capsized suddenly.
Rear Adm. David Throop, Coast Guard 13th District Commander, has now authorized the investigation pursuant to his authority contained in Title 46, United States Code, Section 6301.
The marine casualty investigation will be led by Cmdr. Karen Denny, the executive officer of Marine Safety Unit Portland. Denny, who has served in the Coast Guard for 18 years, has extensive experience in commercial fishing vessel safety and marine casualty investigations.
Upon completion of the investigation, Denny will issue a report of investigation with collected evidence, established facts and conclusions with possible safety recommendations to prevent future incidents.
The Mary B II had been crabbing for three days before attempting to return to port with their catch when the accident occurred.
SEA LETTUCE 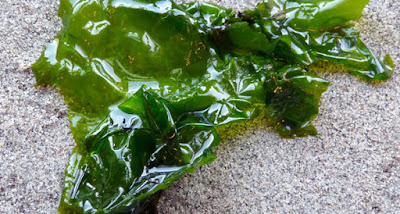 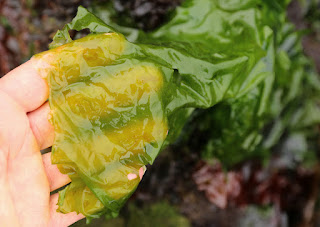 Sea lettuces are those green seaweeds that you see appear as mats . . .  attached to rocks and driftwood, floating along or washed up on the jetty beach. They “bloom” in spring and usually die off in summer.
They are widely found along tropical and temperate coasts, and several species even propagate very well in freshwater streams and lakes like the Siuslaw.  In high-nutrient pollution conditions, green tides can cover several hundred miles of coastal off-shore waters.
Back in the day, we used to fight seine net clogging when school fish fed underneath, and, crab pots clog and then "sail" with the current from this stuff !  when dry it is like wall paper, and hard to remove.

Once beached, these mats can smother shorelines, making these areas unusable for the public as they rot., when sea lettuce populations decay, they emit hydrogen sulfide, a poisonous gas that can harm or even kill humans or animals.
The beached mats can suffocate shellfish or other sea life, leading to a dead zone. Floating mats of sea lettuce in harbors can interfere with fishing nets and lines, get entangled in boat propellers and negatively impact commercial shipping. So...fea fought these all last summer here at the dock.
But, sea lettuce species have valuable attributes. These fast-growing species can act to remove excess nutrients in the water column, such as from coastal runoff. Blooms are therefore good markers of nitrate pollution. Sea lettuce  can also be used to make bio-ethanol and, with its fast weight-doubling growth  time of two to three days and high carbon content, it may prove of future interest as petroleum sources decline. Finally, sea lettuce is eaten in several countries either raw or in stews, and is a staple in Japan.
There is no way to prevent sea lettuce blooms because of the unpredictable nature of nutrient availability in the world’s oceans, although reduced pollution from runoff is critical to minimize their occurrence.
Sea Lettuce relies on bacterial help to gain its typical blade-like form and cannot develop normally in a bacterium-free  culture, like the human gut microbiome, many other species also need microbes to grow and develop normally.
The decline in fisheries due to overuse, exacerbated by climate change, offers opportunities to develop alternative ways of generating revenue from the world’s oceans. Seaweeds can be part of this solution by offering options for biomass production for biofuel production or for animal feed because Sea Lettuce is so rich in vitamins and minerals.
So next time you pull this stuff out of a pump, or untangle it from your crab pot or boat motor, take a different look at it, we might be growing it someday.