Met the foot soldiers from Empire Seafoods (Coos Bay) here on the (65 degree shirt-sleeve weather) dock today at So...fea, and afterwards was sent down some long hallways of memories in listening to them, the seas have changed -yet are the same- 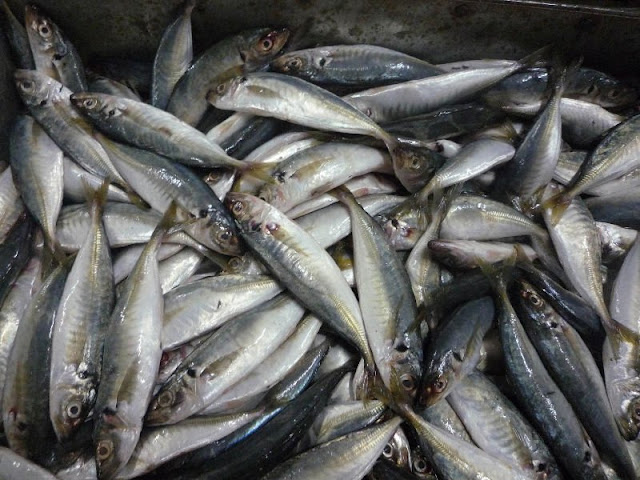 Fisheries Development, was thought by me to be dead and gone . . . not so Marie !  these guys are reliving the same 1970's-1990's "build it and they will come (somehow we will make it work) dream I endured for 20ish years.

Corporate fisheries ignore this group (actually they insuult them),
and, a "politic" is created . . . organizing and supporting this artisanal fisherman and marketing/supplying/supporting them is a untapped revival of hidden revenue and potential.

I applaud their vision.

The world’s population will climb to 9 billion people by 2050, the oceans and their bounty will have to become bigger players than they are in 2019, the marine world currently provides about 20 percent of the world’s food, but, many years of intentional over-fishing, inefficient fishing practices, pollution and climate change have now consumed/destroyed 90% of what the worlds fish stocks were 100 years ago. (1918-2018), and we are now left with 10 % of “what used to be”..

The Corporation I worked for was a part of that fish rape up until 1980, after realizing what we had done, I took the reverse course with my own private Fisheries Development company (1980 up until 2003 (retirement) and still today I am a seafood-Ocean-ecology supporter.


Many of the many information sources, contacts,and organizations I worked with in the 1970’s are still interfacing with me today, and still support my current maritime retirement level of activity.
The three powerful 20th Century world-dominate seafood industry leaders were all American Companies (Chicken-of-the-Sea, Star-Kist, Bumble Bee), but they are no more, their marquis names are  gone - absorbed by new entities. FYI, here are the top world leaders in this 21st century seafood industry, these 10 companies control 50% of the global catch and sales.
———————————————————-.
Thai Union, Samai Sakhon, Thailand (John West, Chicken of the Sea and Bumble Bee)
Dongwon, South Korea’s largest and owner of the StarKist
Cargill (fish meal) Aqua Nutrition and Nutreco, Wayzata, Minnesota, USA
Marine Harvest, Bergen Norway
Cermaq, Oslo Norway
Maruha Nichiro, Sendai, Japan
Nippon Suisan Kaisha (Nissui)
Kyokuyo Co., Tokyo, Japan
Youngs seafood, UK, (40% of UK consumption)
Trident seafoods, Seattle, Washington, USA  (largest in US)
------------------------------------
The Radio show will be returning next month .... it will feature tales just like this ... and, can be found at www.portholepodcasts.com or through visiting here at the blog.