Watching the "dead heads" go down river reminds me of whales,  45 degrees here day and night, windy  from the East and South East at 25-30 MPH (at times) grey and yuk. 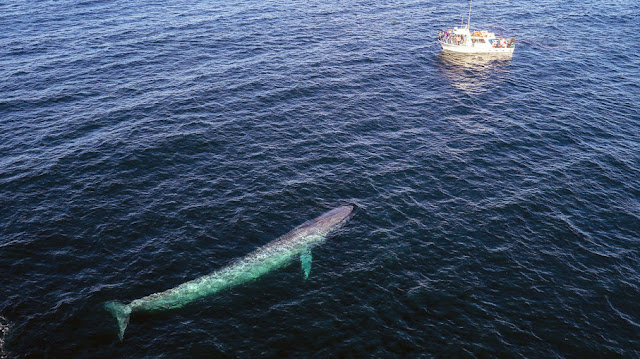 The largest mammal to ever have lived on Earth in the history of the planet is not a dinosaur or some prehistoric monster. It's the 90 foot Blue Whale, and it is alive right now, swimming around in our oceans,E seen here alongsde 45 foot whale-watch boats (the size of So...fea).  There are estimates of  between 10,000 and 25,000 blue whales in existance worldwide, today our California Blue Whale population is estimated at 2,200.

. Before whaling, the largest population was in the Antarctic alone was approximately 239,000. 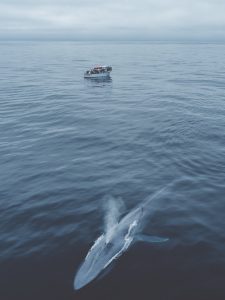 Encounters with these guys at sea, are scary up close, especially on under 100 foot vessels, their rendition of a back rub is terrifying, and you very quickly get the idea of what will happen if one rises and lunges up underneath you. They swim at around 12-15 knots (like most sail/trawlers do), and can sprint up to 25 knots when playing . . . a lot of inertia and wallop if your boat gets in the way.