Generally, commercial and work boats (trawlers, tugs, cargo) boats are over 40 foot and under 150, anything bigger is indeed a “ship”, anything smaller . . . well.

Of course, these are not “sail boats”, but engine driven craft . . .  many crew, or fast supply boats can have four props, and they functionally operate like a twin propeller boat, which is quite different than how a single screw boat operates. 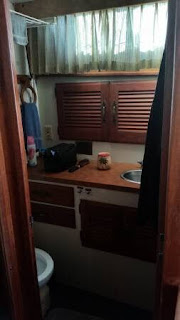 To a boat lover, or a crew member/passenger none of this matters or is even something you would ever be aware of when aboard, but to a boat “operator” or a Captain, this is ominous.  At sea, and simply navigating, the twin works like a single - and both engines controls are usually worked as one (together), it is safe to say that “any” experienced captain can go from point A to point B at sea with ease on any type of craft.

But getting away from the dock, and returning to the dock, however . . . can embarrass, humiliate, flummox, and destroy the ego of any salty sea boat captain easily (when not familiar with the twin screw arrangement). I learned my lesson many years ago, so let me share.

Perhaps 80% + of the worlds watercraft  (Canoe to Cargo ship) are single screw.  That other 20% is made up of Yachts, Power Sports Fishers, and only recently many really big ships have twin or quad screws.

What this means is that the breadth of knowledge and wealth of marine experience is with single screw boats.
Single screw boats have huge rudders for steering and control, twin-prop boats have tiny rudders and use the engines instead, this is the dilemma-difference.

The feel and Finesse a twin screw captain learns and understands, is NOT something a single screw captain could ever know about, until he actually tries to dock . . . using engines rather than rudder.

“Alert the harbor ! break out the bullhorns, shoot off the flares, man the davits-get those lifeboats in the water ! clear the docks of women & children, move your boat out of the area, break out the clowns, gather the crowd for a huge laugh-in, and locate as many fenders as you can . . . PeterB is going to dock (sorta’) a twin screw” . . . DO NOT MISS THIS !

For me, I would have saved face, and been better off shutting down, swimming to the dock with a bow line in my mouth, and “handlining” it into its berth, but then, who would have entertained these assembled masses of cheering/laughing/instruction yelling onlookers ? Who would they make fun of for the next few years ?
That was my first and last time to try twin screw…. As a guy who laughs at bow/stern thrusters, for the twin engine powered So fea I really need one of those Ford self-parking devices (until I learn), a sequel to my last fiasco is not something I look forward to in moving from Winchester to Florence. Hopefully, the old boat owner will escort-Captain us to our new harbor and save me a repeat.