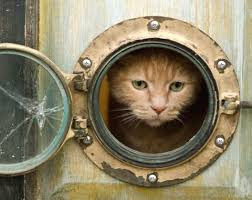 Yugo, one of our ship's cats, has never seen a Sea Gull before, the Royal Navy banned cats from all British ships in 1975, sailors and cats have a special relationship that dates back thousands of years.
The ancient Egyptians were the first seafarers to realize the true value of having cats as shipmates. In addition to offering sailors much needed companionship on long voyages, cats provided protection by ridding ships of vermin. Without the presence of cats, a crew might find their ship overrun with rats and mice that would eat into the provisions, chew through ropes and spread disease.
More superstitious sailors believed that cats protected them by bringing good luck. It was also common for crews to adopt cats from the foreign lands they visited to serve as souvenirs as well as reminders of their pets at home.
we have always had cats, never just one . . . usually 2-4 at a time, some 40 years ago we quit ever allowing them outside, so, we "live" with our cats. because of the close interface with us and the dogs (usually 2), and our living in busses, motels, on boats, and travelling heavily our cats take on a different personality.  We moved to a boat with a bird-lover cat, who used to love stalking birds out the window, when we moved aboard the Big Flamingo, he got his first encounter with Pelicans on deck....
For us, Plan "B" surfaced today . . . we contacted two of our neighbors, one owns a electrical contracting business, the other owns the local real estate.  We added in $10,000 to the sale price to cover real estate fees and this upgrade, and re-listed it today ! and, had the other neighbor begin the needed electric panel work (it will be done tomorrow) for a thousand less and 20 days sooner than what the cancelled buyers bids were for.