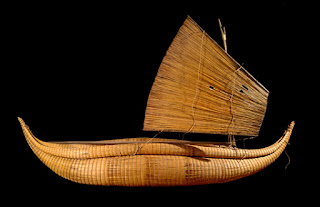 This (excerpted) article appeared moving through my LinkedIn site: “A Mesolithic (10,000-5,000 BC) boatyard was recently discovered on the Isle of Wight along with wheat DNA indicating “Hunter-gatherers” in Britain were importing wheat long before ever farming it themselves. Confirming (that) maritime (boat) trade has been active as far back as at least 7,000 years ago. The Egyptian’s, Phoenician’s, Persian’s, Greeks, Chinese, all developed extensive sea-trade routes throughout the ancient world. By the time Jesus was walking the hills of Galilee, sea trade was already ancient. Ancient sea trade did not, however, translate to “safe” sea trade. Although transport by sea was cheaper than by land there was far greater risk in it.” Capt. George H Livingstone 2017. ————— Here on the dock along-side So...fea, we constantly engage tourists inquiries, their misconceptions are plentiful and we consistently hear the same questions, I do not know exactly what the 2019 U.S. per capita ratio of marine savvy vs. landlubber population “is”, but back around Y2K, we estimated it at 25 million vs. 285 million… so, it must be around 1 to 10, in other words, 90 percent know zip about boats, harbors or the water. Being around, and familiar with boats and ships, we all can (and usually do) forget the importance of (and, the legacy of) our own maritime culture, our marine experiences, and what we know (that the other 90% does “not” know). Hence, the questions. Man-Boats & Water (Cargo, Fishing or Naval . . . Lake, River or Ocean) have been around awhile, but, 5,000+ years of Technology or Manufacturing have really not changed the Marine world very much from its origins, we only have learned to go bigger, faster, safer, and easier . . . Mother Sea still rules, as untameable, erratic and scary, we still lose men and ships to her daily. Although Captain Livingstone is addressing ocean Trading and cargo, ocean Fishing is the equally important dynamic, both have influenced boat designs and building methods equally. Captain Livingstone’s remarks about historical beginnings inspired me to post today’s and tomorrows blog entries as a Part One and Part Two; ---------- In Part Two we will share the answers we give to the most-asked simple questions that we receive: