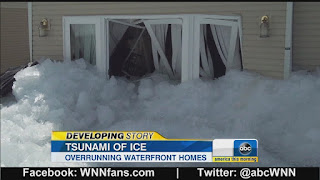 Most of this week Eugene has been hit by three days of snowstorm, it dominates the news out here, trains and traffic stuck, businesses closed, electric down,  but, out here on the coast, mid 40's sun in and out, spotty rain, and pretty nice!  In the email exchanges, my old stomping grounds back on the North Coast are getting hit hard as well, there are two videos loaded here sent in about a phenomenon called "Ice Surge", or nowadays "ice Tsunami".

I grew up on the Southern lake (Erie) shore, and worked the above and below Niagra waterways from Duluth to Quebec, especially in the Buffalo-Cleveland corridor.  The local news talks about "Ice Tsunami"! 75 MPH winds and sub-zero temperatures all along the Southern Lake Erie coast. While Eugene digs out, we sit here. . . remembering.

The use of the word "TSUNAMI"  in English is somewhat new, it actually means "Harbor Wave" in Japanese, almost all Asian Seaports are fully open to the sea, and therefore a huge tidal wave or storm surge wave can "push-in" and do immense damage, the term has now become English-generic (almost slang) for "BIG WAVE" or storm.

Hurricanes/Typhoons/Cyclones/Tornados yield huge storm surges (especially when accompanied with regular lunar tides), and can be devastating but, there are other dynamics of water that many are unaware of . . . that all involve "fresh" water, not salt water.

On earlier Deck Logs we have talked about boats and "winter", but, "Ice Tsunami" or "ice shove"  brings up some phenomena many may never have even heard of out West . . . so, I am going to address "Fresh Water Boating" a little deeper.

After exposure to both Sea and Lake waters, my opinion is nature is simply in control, so if you venture out onto either do your homework. Ice on water is rarely addressed, ice onshore even less so, In 2001, ice shoves on the coast of Alaska's Chukchi Sea reached up to 16 feet high, ice shoves on Lake Erie can be just as high, we called them "ice Lava" as kids.

People love living on the coast -as close to the water as they can-, usually these properties are for the very wealthy, and they never expect the water to come into their house... last summer we watched the Hawaii Lava flows, somehow this is the same, imagine coming home at night to this . . . 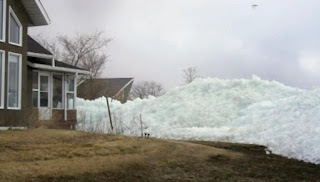 
In Page two we will look more at boating in the ice, and what the offshore life is like in winter on Great Lakes, I will dig ut some old pictures and build an album!