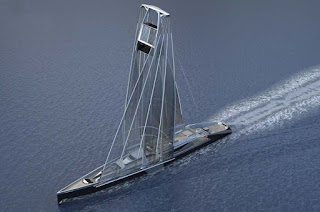 The two biggest misconceptions people have about boats (all boats-modern or ancient)  are their “Size” and “Speed”.

Prior to using steel for boat construction (which evolved in around 1850), for the first  5-10,000 years of boat building "only" wood was used,  and, 200 foot long 10 MPH boats  were the  maximum length and speed of almost anything ever built for 5,000 years, only in the 1800's did the (over) 200 foot long ship size become standard, (the largest  wooden ship ever built was the 20th Century 1908 building of the Wyoming  (USA), at 449 foot X 60 foot wide), the fastest sailing ship was the 212-foot British tea  clipper Cutty Sark, famous for attaining and sustaining a speed of 20 MPH in 1870, both  of these were the last gasp of the wooden sailing vessel.

The invention of the steam turbine in 1884, and the use of riveted steel finally ended the 5000+ year domination of wood, the sail, and the 200-foot boat, after 1920 (or so) welding made ships and boats evolve into what we have today, while Fiberglass has dominated the under 100 foot boat.

But, that is not how we perceive the Pirate ships and Spanish Galleons or British Man-of-War sailing ships we see in movies (which we envision as much bigger).

Keeping things in historical truths, the largest Galleon ever built by Spain was a 1200 ton 210-foot long monster ship in 1780 . . .  All of the 1700-1800 era British, Spanish, Italian and Portuguese sailing ships that we see portrayed in “Pirate” movies plying the oceans, and fighting storms were only around 150-180 foot in length.

The image atop  yesterday’s (7 February, 2019) Deck Log was what the very first Egyptian sailing boast evolved into back in 3,000 BC, made from bundles of dried reeds tied together and around 40 foot long, with a  simple junk-type sail of made of papyrus (similar to a grocery bag paper).

Around 350 BC the 90-foot long Athenian trireme was a fearsome war machine propelled by. propelled by. 170 oarsmen who could propel the boat at a sustained speed of 6.9 MPH. later, around 100 BC  the Roman sailing ships were about 130 feet long with an estimated capacity of 440 tons and were the largest ships afloat and traveled at 5 MPH.

In around 900 AD the 75 foot long 15 foot wide Viking sailing ships (which used Oars or sail) could cruise in the 10 MPH range in a good seas.

All through history, up until the late 1800’s (when steel and Diesel power entered), wooden sailing ships and boats never became bigger, the SS Constitution, built in 1797 was 204 foot, and is the oldest wooden sailing ship still afloat. Bigger still, was the 226 foot HMS Victory, built in 1765, which is today the oldest Naval ship still in commission, she sits proudly docked in Portsmouth, England.

Most people we talk with here at So...fea are shocked to learn that boats generally “only” travel at 10 MPH , (whether sail or diesel), and “10 MPH” has been the maximum average boat speed for the past  5,000 years (and still is). Only in the past100 years (1920 or so), could most luxury Cruise ships and Naval vessels travel at a 20 MPH cruising speed, in the past 15 years, that speed  has risen to around 25-30 MPH for Cruise ships Container/Cargo and Naval ships, but not for Fishing, sail or pleasure cruising boats, who all still “cruise” in the 10-15 MPH range of speed.

Today, one of the world’s fastest ocean liners is the Queen Mary 2, launched in 2004, the USS Gerald R. Ford Aircraft Carrier, both cruise at 25 MPH and can sprint up to around 40+ MPH, but, the fastest passenger ship anywhere today is the 58 knot cruising speed of Francisco, (named after Pope Francis), which was built to carry 1,000 passengers and 150 cars the 140 miles across the river between Buenos Aires and Montevideo.