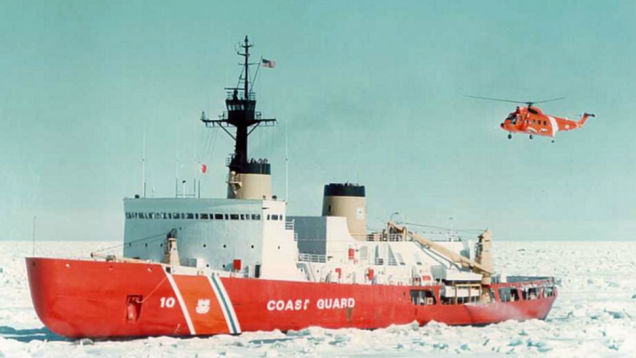 In an earlier blog on 24 JANUARY, 2019 we talked about the US Coast Guard not getting paid during the government shutdown. While that was going on, an ongoing duty assignment in process was the resupply of our US McMurdo ICE Station in Antarctica.  The USCG POLAR Star WAGB-10 a heavy 399-foot icebreaker was in the middle of 21-foot thick ice trying to lead in a resupply ship full of supplies for McMurdo.

This is the sixth year for "operation Deep freeze" that the Polar Star has headed into the mid-winter ice down South.

The Polar Star is now 43 years old (1976) . . . (most bluewater ships have a life-span of around 30 years), and in this harsh service, it is unbelievable she is still in commission!  especially in the dangerous service of possibly being frozen in, hull crushed and losing the 141 man crew stranded in sub-zero conditions.

She is continually into failure modes, having a crew of well trained and versatile (experienced technicians aboard is all that keeps her afloat the ingenuity of the 141 officers and crew have weathered some gigantic failures.  On this current voyage an electrical system overheat damaged a switchboard, an evaporator failed, then a shaft leak stopped the ship dead, requiring divers to perform emergency underwater (ice) repairs, later, another power outage stopped e ship again, requiring a nine-hour reboot of all systems to get back underway.

This year's cruise might sound ugly, but it is actually somewhat better than last year when, in addition to another shaft seal failure, one of the  gas turbines failed, the previous year (2017), as the Polar Star completed Operation Deep Freeze, it was another mechanical fiasco when again an evaporator failed.

The Polar Star is the only operational US heavy icebreaker, her sister-ship, the Polar Sea has been out of service since 2010 due to the failure of five of her six Alco 3,000 HP V-16 diesel engines. (I hold a lengthy involvement with now-defunct GE/ALCO Diesel, too lengthy for here), I would presume the POLAR SEA is a donor for obsolete parts ship keeping the POLAR STAR in service and is used as a training-at-the-dock vessel as well.
The Russian Navy has over 40 icebreakers and just ordered 8 more, the US has none even on the drawing boards. If the Polar Star should ever break down in the Antarctic, there is no other heavy icebreaker to come to its aid. The US Coast Guard only has the medium icebreaker, the USCGC Healy WAGB 20 (the first  United States vessel to ever reach the North Pole on the water), which is only rated as a  ten feet of ice cutter ship. The Healy is based out of Seattle and stationed in the Arctic while the Polar Star operates in the Antarctic. In case of catastrophic failure to either vessel, neither could any mutual assistance within a reasonable time-frame.

In February 2018, the Senate tentatively approved $750 million to build one new heavy icebreaker, but in August 2018 Homeland Security canceled the funds.