I was fortunate to be in the Navy and later around the shipyards and quays while the Boatswains Mates, Net tenders and marlinspike seamen were still an alive and working craft here in the Americas, sadly most are gone now, ending a centuries-old tradition of seamanship.

In this 21st Century, there has been a homogenizing of the world's sailors, craftsmen, and traditions, it is another epochal event like when the masted sailing ships gave way to steam and diesel-powered boats, and like wood boats yielding to steel boats (and later, the onset of Fiberglass), now, old skills are replaced with new technology.

In my lifetime alone, I watched heaving lines transform from hand thrown monkey fists to crossbow, then to shotgun propelled, now with bow thrusters and drones, even the shotgun is obsolete. 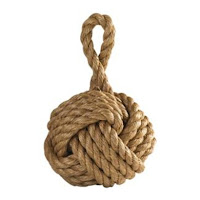 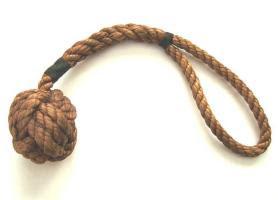 
Sailors, going on liberty, usually just got paid, on their way to the bars and brothels of a seaport, were
natural targets for street thugs interested in relieving them of their hard-earned, if meager wages.
Some sailors carried brass knuckles to defend themselves. Others could carry a monkey’s fist.

Rather than having a heaving line attached, a sailor could slip his hand through the eye splice and use
the monkey’s fist as an effective and dangerous club, capable of knocking out an attacker or even
opening his skull, if wielded with enough force. The money’s fist as a weapon became known as a
slungshot.

The slungshot was easy to make, easy to conceal, silent to use, and was lethal . . . while still an Attorney Abraham Lincoln defended “Duff” Armstrong, charged with murdering a man with a slungshot in 1858.
In the late 19th Century up many states prohibited even carrying them, it was a felony in the states of California, Oklahoma, Massachusetts, and Michigan. And Nevada, Washington and Minnesota consider it either a misdemeanor or a felony to possess a Slungshot.

New Hampshire says possession of a slungshot carries a misdemeanor in a 2010 law, and in 2016, Florida repealed its severe 1868 law to a misdemeanor, and Tennessee’s "going armed" statute includes the slungshot as a prohibited weapon.

Tomorrow in Part two, we will look at the Bosun's Mates that make these knots (along with Macnamaras Lace).