WEATHER>>>>We have none, only rain and 45 degrees day/night 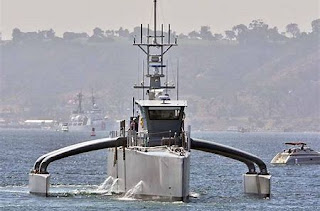 The autonomous robot trimaran named Sea Hunter, a Medium Displacement Unmanned Surface Vessel (MDUSV) is a 132′ long unmanned vessel that was originally designed to track enemy submarines all by itself (autonomously), and to be used for coastal security patrols and rescue by the USCG.

She just sailed from San Diego, California to Pearl Harbor, Hawaii and back without a crew !  An escort vessel followed Sea Hunter along, but only boarded to be sure things were in calibration and going as planned for this “first-time” round trip of 7,000 miles. The super-fast (cruise at 28-30 Knot, sprint to 45-50 Knot) fuel economizer Trimarans and Catamarans have taken over the mono-hull ship design base now, and almost everything built is either a Tri or Cat. 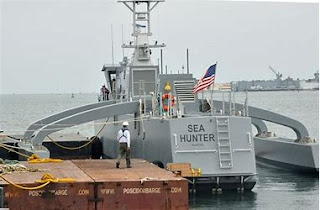 When there are many 100 foot plus autonomous ships (sea drones) plying the seas, for the US Coast Guard and US Navy, who has the right of way out in a seaway? How will they communicate with cargo and fishing vessels?  (with all of the recent US Navy collisions while manned (with dozens of people on the bridge), is this even possible? This certainly is a new class of electric propulsion vessel, with huge prospects for use in foul seas and dangerous situations, good “eyes-on” spy and communication bases, recon, and even as an armament launch base. 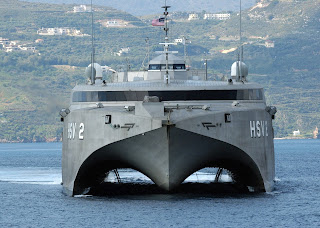 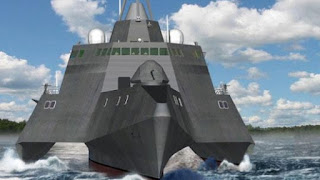 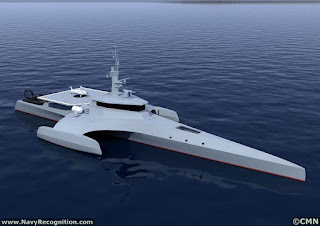