There was a sea change to the world's Navies in around 1970, the modern times, equipment, ships, and technology had all sweepingly changed... the "players" were different, and the "old" (pre-1970) Navy, ships, planes, rituals, sailors and traditions were no longer valid or applicable, the "new" navy came of age.

I talk to many young Navy/Coast Guard (and foreign) sailors here on So...fea's dock, their "new" Navy experiences and my "old" Navy sea time do not relate well to each other.

In their being respectful, I am usually led off onto one of my tales or "sea Stories" ("swinging my lantern" as the British call it), a process that makes me feel like some sort of old Whaling ship captain, or peg-legged pirate sitting on a bollard surrounded by wide-eyed school kids.

Prior to 1970 (during Viet Nam) I worked the flight deck on two Aircraft Carriers, one British, and one American, I also associated with boats and sailors from all the five eyes countries, only the ship sizes, language, and mission were similar, all else was different ... COMPLETELY !
Alcohol in particular, my shipboard and liberty call exposures here still make me smile.

Giving British sailing ship crews alcohol was intended to help sailors find comfort and calm during times of rough seas, it eventually developed into a tradition of the Naval Service in the early 1600's.
Here in America, in 1794 U.S. Navy sailors received one pint of rum a day, in 1806, the Navy encouraged the sailors to accept whiskey as a substitute for the more expensive rum (Sailors who did not wish to imbibe or were underage were paid an extra three to six cents a day),  in 1842 the ration was reduced to 1/2 pint (8 ounces) and was then totally eliminated in 1862 (during the Civil War), but personal flasks were still allowed up until 1914.

The July 1914 USN General Order 99, mandated the US Navy to remove "all" alcohol aboard any USN ship, including enlisted men's flasks, and even in the Officers wardroom or at the Captain’s cabin and table...  In 1970 the British Royal Navy did away with Alcohol, followed by Canada in 1972 and New Zealand in 1990. Australia really never had alcohol on board.

Today... one could say "there has been no alcohol allowed on any Navy ships world-wide for the past 30 years", but what came before... for almost 400 years, is the story here.

The confusing multiple names of the rum ration start the folktale, It became known by a variety of names including "Nelson's blood." "grog" and the "tot".

In 1805 Admiral Nelson was killed at Trafalgar, his body was shipped home preserved in a barrel of rum... when the barrel arrived in England, Nelson was in it, but the rum was not... there is supporting evidence that sailors took the opportunity to tap into the resource, resultingly, the Royal Navy upheld the joke and still use the toast of "tapping the admiral" or "drinking Nelson's blood".

When British Admiral Lord Vernon, tired of seeing "groggy" sailors, ordered the rum cut with two parts of water (including lemon/lime juice) in 1740, it became known as "grog", the newer reference of a  "tot" was meant like a small child (a small amount).

Rum (like beer) was/is simply not considered the "taste of privilege" for high-bred Naval Officers Country or Wardroom sittings, I believe none of the Five Eye Navies ever issued rum to their officers...  back in 1677, beer was the crew's lot... each sailor was assigned a gallon a day (i.e. eight pints), but, beer spoils easily when hot, and, back as early as 1655 1/2 pints (8 ounces) of dark rum were the alcohol of choice over in the West India Company Navy, while in the British Navy East India Company, even as late as 1731 full pints of wine, or 1/2 pints of arrack (an Indian/Asian spirit) were used.

Later, during 1756 to prevent scurvy, Royal Navy regulations required adding small quantities of lemon or lime juice to the grog ration (which created the term "Limeys"), in 1823 the 1/2 pints (8 ounces) of dark rum rations were cut in half, becoming the traditional amount of one-eighth of an imperial pint (71 ml) of rum given out at midday at lunch.

Senior ratings (petty officers and above) received their 1/8th pint of rum neat, but junior ratings were diluted with two parts of water (with lemon/lime juice) to make a three-eighths of an imperial pint (7.2 ounces) serving of grog.

In 1970, Admiral Peter Hill-Norton abolished the "tot"... the last rum ration was on 31 July 1970 and became known as Black Tot Day, sailors were so unhappy about the loss of the rum ration they threw their tots into the sea, and staged mock funerals aboard ship.

The rum ration was let just before the first lunch call (1145) accompanied with a "Stand fast the Holy Ghost" response to the bosun's pipe-call "Up Spirits" , each mess had a "Rum Bosun" who would collect the rum from the officer of the ship responsible for measuring.

The ritual was similar on most ships, a  rum-filled 1/3 or 1/2 wooden barrel or tub ornately carved with the ships emblem and some salutation to the queen (and more), in the chow hall, or carried between messes by rope handles and either dipped into, or served out of, by the bosun, into bottles with funnels, a tin cup, or a mess Pitcher, ladle or special personalized mug... I have seen punch bowl type common shared cups hung around the barrel as well... many are bottle then "utilized" later after ships work. 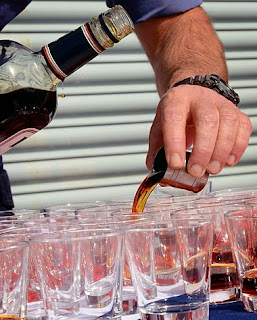 The mess I was in, was formally served out of glasses, (like in the picture), and I learned about dealing with the tot like poker...or possibly marbles...  loans, bets, favors and other changed hands with giving up your tot as payment... it was later explained to me as: sippers being a normal swig or drink, a gulper being a "Big" swallow, a halfer being just what it sounds like, and a sandy bottom being the entire tot.

Betcha' three sandy bottoms she will not go out with you !

tot mugs/glasses/cups/bottles were kept separate, or in your locker away from any other containers and only washed on the outside, never inside, believing that the container would "season" with age and make the next tot stronger.

The half-pint (8 ounces) of spirits was originally issued neat; in olden times, sailors would "prove" its strength by checking that gunpowder doused with rum would still burn (thus verifying that rum was at least 57% proof ABV), hence, the origins of the term "proof" when describing the strength of any alcoholic spirit.

NOTE: depending on the type of ship, it's captain, the B'osun, which fleet it is in, and what year it is... sea rituals and traditions are living forms, and are not always cast in steel, they are changeable and different ship to ship. The rum ration, traversing the ditch, crossing the line, pollywog/shellback, and golden Dragon traditions have all modified and now almost entirely ended in modern times.

Royal Navy ships have many traditions that are unheard of on American boats, and the Aircraft Carrier routines are different than on a ship of the line, the Brits have "messes" for each paygrade... a sort of clubhouse or lounge, we have nothing similar.  The British carrier tempo is almost the opposite of the American, they retire in the evenings to their mess... some had alcohol available, and the "tot" from lunchtime was disbursed now that the day was over.

The high order to "splice the mainbrace", is awarded to sailors as an extra tot of rum for their good service, even now without a tot,  it remains as a command which can only be given by the Monarch and is still used with dark rum to recognize exceptional service.

The newest British Aircraft Carrier, however, has a full bar inside... https://www.thedrinksbusiness.com/2018/08/pub-installed-on-royal-navys-newest-carrier/