Everyone has heard of the 1915 Lusitania and 1912 Titanic disasters, and most believe they were as bad as you can get with 1,100 and 1,514 lives lost to the sea, many sinkings are far worse than the Titanic and the Lusitania combined, many other tragic sinkings at sea are forgotten history, but are here for review (including one with an 80 year Anniversary today):

The largest loss of life at sea (ever) was the 1945 Baltic Sea sinking of the German Cruise Liner M/V WILHELM GUSTLOFF In January of 1945, which was hit by three Soviet torpedoes while evacuating civilians, military personnel, and Nazi officials from East Prussia.  An estimated 9,400 people were killed in the disaster, making it the largest known loss of life in recorded maritime history.

The M/V GOYA, a German transport ship had 6,100 documented passengers on board (and possibly hundreds more unlisted) when it was struck on April 16, 1945, by a Soviet submarine in the Baltic Sea during World War II, it sank seven minutes after being struck by the torpedo, killing almost all of the passengers and crew aboard, only two children were among the 183 passengers who survived.

The Philippine M/V DONA PAZ ferry boat sank in December, 1987 while most of the passengers slept during the night when the ferry collided with the M/T Vector, which was carrying 8,800 barrels of gasoline, the crash caused a fire that quickly spread to the Doña Paz, as well as lighting the surrounding waters on fire... ending with a death toll of 4,375 people.

Eighty Years ago Today... 17 June of 1940, the Cunard passenger liner M/V LANCASTRIA had been requisitioned by the British government to evacuate troops from the Dunkirk area, the Lancastria was sunk by German bombers and as many as 5,500 British soldiers died in the sinking, BUT... the tragic sinking was covered up for almost 70 years.

The loss of the Lancastria was such a shock to the British government that Churchill immediately sought to cover it up... Churchill said, “The newspapers have got quite enough disaster for today, at least”  the Lancastria sinking did not fit with the grand British narrative of that period – after the miraculous evacuation of Dunkirk, and the Battle of Britain, so, British newspapers were not allowed to write about the disaster, and the survivors were instructed never to speak a word about the Lancastria even to friends and family.

Their sacrifice was ignored for decades because successive British governments refused to formally acknowledge the loss of the Lancastria for propaganda reasons, secrecy, whether deliberate or otherwise, continued to shroud the Lancastria like the dark, silt laden waters which now cover the wreck site.

But, finally in October 2011, the Lancastria Association of Scotland erected a memorial to the victims on the very site where the ship was built, at the former Dalmuir shipyard at Clydebank. 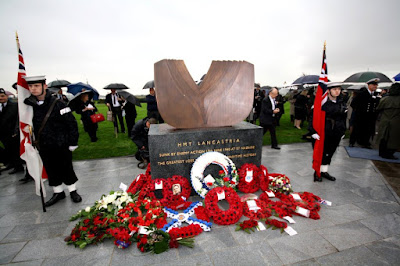