With all the talk about "1st language", at a recent USNI get together, the doctrine about  English is the "legal" International language of both Sea and Air arose . . 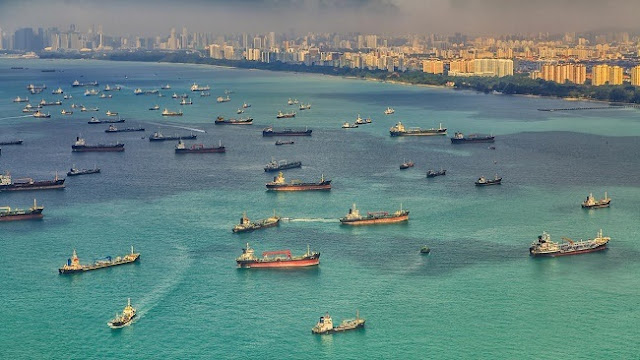 Actually, English is a ocean-going minority language due to the high number of at-sea (foreign) Commercial boats, port officers, boat crews, and with the  many major foreign ports making communications a serious and twisty problem at sea, on arrival, or in port.

As a Merchant Seaman, Cruiser, Commercial fisherman, or blue-water sailor of any type, you are exposed to many different languages, customs, and protocols as you travel the global seas, whether you "work" the boats onboard, in shipyards, or port management.

Americans are by far the worst at International anything . . . our arrogance, manner and bluster do not mix well (anywhere), there is no place where presumptuous works, Americans always expect a pilot, tug master, dock master,  customs agent, repair crew or port manager to speak fluent English (when "they" can’t speak "their" language at all).

All of the oceanic language chaos of two world wars, and the previous Centuries of mis-communication (and misinterpreted actions) supposedly went away in 1955 with the adoption of the NATO alphabet, the International code of flag signals, and Radio-Communications Standards, then later, in 1988, the United Nations agency IMO (International Marine Organization) made “Seaspeak” the international language of the sea.

By the time I went to the water, most of the confusion was gone, but, the importance of learning non-verbal communication skills was paramount to navigating world ports, people and yards (as is known to anyone who has ever frequented foreign situations and events).


Language barriers have long plagued safety at sea, accidents due to misunderstandings or miscommunications can become disasters when there is no common language among officers and crew or passengers, or between a Port and a boat, two boats, or for a ships master and harbor pilot speaking very different native languages.

Masters, pilots, tug Captains, Coast Guardsmen, and the boardings for customs and immigrations worldwide are full of tales of "near miss" (or not) serious accidents, open conflict, arguments and misunderstandings due to a language barrier.

BUT Seamanship and Experience are the "true" International language in Ports, Harbors, Tugs, Pilot boats, Customs and Port Captains boats, Coast Guard Vesels, and commercial boats of all types . . . on/in waterways of all sorts and at sea. As in many levels of authority and expertise, one professional will always recognize another simply by his actions and demeanor, the novice or inexperienced is quickly identified and dismissed.

You soon learn that your "familiarity" with the many processes of docking, piloting, assists, and even emergency are all shared by all of the worlds true seaman ... and, language is not needed, the established routines and rituals are "actions" requiring experience, and gestures, not necessarily words.
The reality is that language barriers are "increasing" at sea rather than  decreasing, creating potentially unsafe situations between boats, but there is an older more powerful language of the sea. A universal language that often may transcend and mitigate debilitating barriers that international language is professionalism and experience. In depth knowledge and expertise demonstrated and executed;  called Prudent Seamanship.
Skippers, and all involved with navigation and berthing. How do you safely berth a vessel when the master, port and pilot are all having a difficult time communicating . . .  or not at all?

On the part of the skipper, by demonstrating and executing Prudent Seamanship when approaching and signaling the Pilot Station to his officers and crews well trained in on deck interfacing, respect, and seamanship.
The local tug captain coming alongside a vessel to put a line up, or offer a push knows immediately if the ship’s crew are seasoned professionals or week-enders, (without a word of contact between the ship and the tug). The tug captain knows by the demonstrated execution from the ship’s crew, no words need be spoken.

Likewise, the arriving pilot boat, and pilot boarding the ship’s bridge may only have to demonstrate with hand signals that his/her experience and prudent Seamanship  are Professional.  When you pull into a new harbor, and seek radio contact, or begin your docking line heaves, or lay to for instruction . . . you very quickly know about the level of this ports Prudent Seamanship, professionalism  and experience, starting with line handlers.

Is English the true international language at sea then?