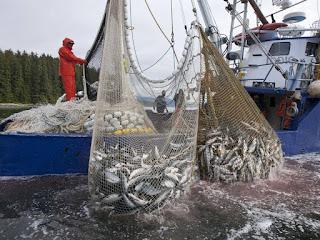 In 2018 Overfishing, rising sea water temperature, and ocean acidification all caused huge losses to global
wild seafood populations, these three changes in ocean chemistry have a devastating impact on ocean
food fishes like Tuna, Salmon, Cod, and Herring, and the impacts can be fatal for the many shell-forming
invertebrate organisms, such as shrimp, crabs, corals that rely on dissolved minerals to build their shells
and exoskeletons of shell-forming planktonic organisms, including plants like coccolithophores and marine
snails called pteropods, which are an important food source for fish, especially tuna, salmon and whales.

Seafood is among the most commonly consumed food source in the world today.

Seafood provides some 1.5 billion people with about 20 percent of their intake of animal protein, and
another 3.0 billion people with “15 percent” of theirs). In 2018, the world’s fish farmers and fishing fleets
harvested 120 million tons of seafood, about five times the catch of 1960.

Although seafood consumption differs among countries, and even “within” a country, China (with 20%
of the world’s population), eats 1/3rd (40 million tons) of the worlds seafood catch, Myanmar, Vietnam
and Japan combine to eat another 6 million tons.

Acid levels are the real detriment, for all that we hear about pollution, and plastic, or about rising sea
temperature, and Co2 . . .  it all translates to simply creating acid.

Since 1900, the world's oceans and the marine ecosystem as a whole have been becoming steadily more
acidic as they soak up ever-increasing amounts of carbon dioxide from the atmosphere and pollution,
driven by the tripling of the world’s population numbers (and the industries needed to support the
civilization), and mankind intentionally ignoring pollution.

Scientists estimate that the surface pH of the ocean has dropped by 0.1 pH unit since 1920, CO2 levels at
the start of the Industrial Revolution was at around 270 parts per million (ppm) as compared to today's
410 ppm, this means that it’s dropped from 8.2 to 8.1 in just a hundred years.

Christopher Free, of the University of California, Santa Barbara, whose work is published in the
journal Science, examined fish population data in 38 regions, studying 235 fish populations made
up of 124 species, which represented about a third of the total global fishing catch observations over
an 80-year period (1930 to 2010).

Natural volcanic seeps, where the escaping CO2 gas dissolves into the seawater and Industry are
releasing around 1 million tons of air-borne carbon dioxide per hour into the Earth's atmosphere, about
25% of which reacts  with seawater and is absorbed to form a weak carbonic acid (H2CO3) causing
the surface ocean pH to go lower by around 0.002 units every year.

Add in the toxic chemicals released from the breakdown of plastic, and pollution like septage, chemicals
from natural runoffs also raises the acid level, in addition to Co2.
Degrading Polystyrene (like one-way store bags) degrade very rapidly at tropical water temperatures of
86 degrees F, releasing  compounds such as styrene trimer, a polystyrene by-product, and Bisphenol A,
a chemical used in hard plastics like reusable water bottles and as linings of aluminum cans,
Bisphenol A (BPA) has been shown to interfere with the reproductive systems of fish, sea life, shellfish,
and humans,  while styrene monomer is a carcinogen. (remember we banned it in baby bottle
manufacture). crustaceans such as shrimp, lobsters, and crab have shells that are a composite of chitin,
proteins, and carbonate minerals that the acid weakens. (shellfish are important sources of seafood,
as about half the total income for marine fisheries in the US comes from mollusks and crustaceans).
We tested shell hardness here for awhile with my Brinell tester (now sold), and compared ours to other regions, we "are" seeing softer shells here!

Coming up in Part Two...  How this ocean pollution all started . . . and, a partial fix not involving fossil fuels.....