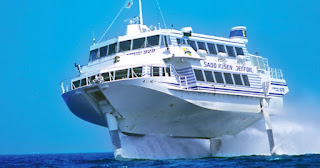 Arne Murke, 30, was sailing with his brother in Tolaga Bay, on the east coast of New Zealand’s north island, when the yacht’s boom swung unexpectedly, whacking him into the water. he stayed afloat 3 ½ hours until picked up by Coastguard helicopter.


To any Navy sailor or Merchant Seaman this story was almost grimace-tedious . . . “He made knots at the end of his pants legs and pulled them over his head, to get air inside and then forced them under water to trap the air creating a  water wing life float", But the response has been "so" extreme, it proves many are going to sea without even “basic” survival skills or knowledge.The very reason for bell-bottomed trousers was to make easy the underwater removal of them for this very use (abandon ship), and dates back in the U.S. Navy to 1817!  The procedure is boot camp level training for anyone who ever went to sea, it is very scary that this no-brainer storyline even made the Maritime newswires at all.


I am sure there are old 1940's Training films on this ancient method (that is taught to Army and Marines today as well), but, the procedure is a "no-brainer", it all begins with "always" wearing trousers -not shorts- at sea.


Once in the water, remove your trousers... easy to do keeping shoes on with bell bottoms, you tie the cuff-end of the legs in a knot (either together, or individually), then hold the belt loops and put the trousers behind your head, do a arms-up fast sweep over your head to the front (filling the pants fully with air), and tighten the belt or hand squeeze the belt area closed.
If you tied the legs together, it acts as a head out of the water device for injury or sleeping (like in the image below), if you submerge the untied legs you can "sit" in them. 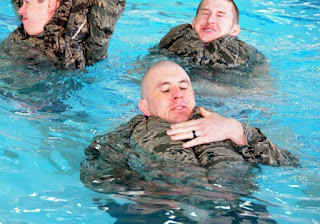 Levis and denim last 15 minutes or so before losing air, if you are wearing those cool surfer baggies shorts that sail boaters and cruisers wear . . . the sharks thank you.