Why would two long-time retired 70+ year-olds on a fixed income decide to "return" to the harbor and back onto a boat ? . . . especially after buying their "dream" retirement home and making all of the "they'll carry me out of here in a pine box " declarations, and stuffing the place with a lifetimes end-collections ?

This next/last-boat journey began seven weeks ago on the 4th of July, 2016;   after a long afternoon and dinner-time of conversation with our neighbors. which led to us into doing lotsa' all day explaining/reminiscing ego-type story telling/talking about our many (35-plus) years of travel, building boats and ships, and marine industry involvements (while living in many different foreign ports) . . .  after the house cleared out,  and the cleanup started, all it took was a simple "ya' know, I sorta' miss the Ocean, and the harbor" which then began this entire life-style-change and chain of events that created this blog................

Early the next morning, it was off to Florence, and an ocean  beach walk, thus ending a 15 year hiatus away from saltwater, the harbor, the smells  and the boats. . . I think the boat-search began the very "next" day after that !   (on the 5th of July 2016).

By a month later (August 3rd - my birthday) , after making numerous trips to Charlotte, Newport, Winchester, and online everywhere West coast . . . we had looked at 21 different boats, reviewed our like/dislikes, and settled in on targeting a steel or fiberglass hull, non-sail, 40-50 foot, single screw diesel, Monk or DeFever trawler style vessel design as our goal (especially TollyCraft and the many Taiwan built trawlers).

In very quick order, the 2016 reality-update of sale prices, and the distance/cruise time/fuel costs and my rusty navigation skills to (long distance) move a boat from "there" to Florence, Oregon quickly narrowed our search area to be Oregon-only (no Alaska-San Diego stuff) . . . . and, as a result, really narrowed the overall offerings that were available to us as well.

But we actually had seen enough . . . so on August 3rd, after more discussion, we decided to go for it . . . Did I mention that we have no money ? are on a fixed-retirement income, and would need to sell our house and everything we own (and move aboard) in order to buy anything?

Back at the land-home base, looking at the realities of our household bloat became an equal (or bigger) problem . . . and the idea of undertaking house-sale-prep and home-selling lurked large, with repeated Living wall-to-wall Estate sales, and all of those procrastinate home repair projects suddenly in your face !

It took us 5 weeks of looking at boats to "find and secure" our boat, (another So...fea) , then, we spent all of July and August  converting and selling EVERYTHING, vehicles, the house, furniture, shop and all the collectables . . .
and wondering "WHY ?".

an'ya grew up in Long Beach California (a harbor town),and was raised around the water, the fishing industry and major seaport exposures.

My growing up on the shores of Lake Erie, there were lots of boats and harbors, the 1.000 foot ore carriers,  the many huletts, Steel mills, and the fishing docks between Lorain and Whiskey Island were always made aware to you  by the Cleveland F-2-T fog horn (the cow) and the Lorain horn which were heard constantly amidst all of the various ships and bridge whistles, we always lived ½ way between these two ports, and within earshot of the Hulletts and, further “spoilt’” by Victory at Sea on TV, and living next door to a retired Navy Oceanographer, I longed to see an ocean.


My first “Sea” Port was San Diego, at age 17 trapped in Navy boot camp alongside the ship channel, at different times I was only one of a few who smelled saltwater, heard the sounds or saw the incoming/outgoing Navy ships viewable from NTC.


In April of 1961 I got my first orders for sea duty . . . aboard the aircraft carrier TICONDEROGA CVA 14 docked at the North Island quay (San Diego), it was 0700, and in a extreme fog when I left the Navy landing aboard the Ticonderoga liberty launch, there were six-eight non-recruit sailors headed there as well, no visibility.


I have tried many times to accurately recreate or describe that first encounter with a Navy ship, but, can never relay the awe, or actual fear of approaching her on the water-amidships while exiting a complete white-out fog bank.


As the fog thinned she began  coming into view some 250 feet away, looming ever larger and more immense as she broke into full view, endless in size… the 1,000 foot length was like a Great Lakes ore carrier, but the 75 foot height was not ! almost 60 years later, I have never ever felt so small, awe-struck, or insignificant.


Since my four years spent on that flight deck, it has been one port, one boat/ship, one marine project, one area of marine expertise after another . . . right up to moving back aboard again - when we bought So...fea in 2016;

Working dockside on large yachts, to propulsion systems for the Navy and sea going anything, in Ship yards, on Commercial Tuna clippers, and seiners, then back to the 50-300 foot yachts, fishing and tug/tow boats, more Fisheries and vessel consulting and FINALLY retirement from the Sea in 1998 (and, fully in 2002).


These travels and exposures on diverse projects of Marine machinery, people, corruption and danger has taken us from Africa to Japan through the Caribbean to both Americas, into many high tech/primitive yards and fleets on vessels of sometimes impossible designs, plus, all of the racketeering, deflection and politics this International fishing and ship building industry can offer.


As boat building, fishing and machinery industries declined over the last 25 years of the last Century, we quit, moved ashore, then returned, quit and returned back to the harbor many times . . . only to now, again, dried out....to end up back in a harbor, back in port, back on the water. . . WHY ? 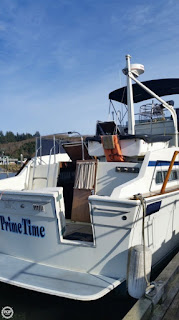