71 % of the earth's surface area is water, hence, there are 372,000 miles of coastline, where over one-third of the world-population, (about 2.4 billion people), live ashore within 60 miles of the coast. No one "really" knows how many people world-wide live "on" boats, it is my guess here in Oregon only around 300 people are "full time" live-aboard boat dwellers, which would make for about .001% of the population.

But, if you are familiar with the south Chinese Tanka Sampans of all over South East Asia, the canal boats/narrow boats of the UK and Europe, the Oceania/Indonesian/Filipino Bajau,  the Indian gulf boats and the new culture arising here in North America/Caribe, you know how relatively small the International FULL TIME boat dweller population is, (guesstimates are about 1 (one) percent of the world's population), but, in Tam Giang, Viet Nam alone, 10,000 Sampans house some 100,000 people as year-round family live-aboards. on 35-45 foot boats. 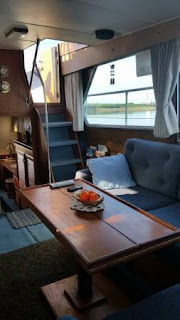 Working in and around many ports, lets you in on not only the large groups mentioned above, but also introduces you to the "cruiser", the "harbor rats","anchor outs" and "liveaboards" of many varieties (all of these full-time boat people).

No inlander is ever exposed to them, and even the local 9-5 harbor-employees (who go home inland at night) are unawares; Ashore they are confused by landlubbers as alternative-lifestyle "hippies", "Bohemians", laughingly "earth people", Bargees", or "constant cruisers" who are mostly  on 32+ foot sail, and over 40 foot power boats.

The International "System-Establishment" landlubber knows as much about this boat-group as they do about the Hells Angels, the Arioli, the Occult-hand Order, or the secret tenets of Whazammo and the Doomship.

The driving forces that created the niche for "boat dwellers" is not 21st Century, this bunch dates back many Centuries, but, the rationale has always been the same; housing costs, Taxes, Governmental control over the buying processes, and third-party "takers" (sanctioned "by" the governments). When you are in the conventional system, you do not "see" the process, in order to buy a house or boat it must be inspected, it must be appraised, it must pass all government regulations, Taxes-Banks-Insurors-Brokers-Homeland Security all get a cut, and "you" are credit checked, investigated, work-checked, drivers license inspected, on a cash basis all of that is deemed un-needed and is eliminated.

LIVE-ABOARD STATUS IS FROWNED UPON. Banks don’t want to hear that the borrower will be using the boat as a primary residence. Residential Eviction laws make it difficult to repossess a boat that is lived on and, by definition, a live-aboard presumably also has no primary residence as backing to be used as collection or loan collateral.

In October 2010, the US government changed some of the laws which govern financial institutions in how they are to service loans. More specifically, the Federal Reserve Board (“FRB”) published new rules amending Regulation Z which implements the Truth in Lending Act (“TILA”) and Home Ownership and Equity Protection Act (“HOEPA”). The goals of the amendment are to “protect consumers in the mortgage market from unfair, abusive practices or deceptive lending and servicing practices while preserving responsible lending and sustainable home ownership.”

The Federal rule requires a creditor to establish a 12 month long Escrow Account for homeowner’s insurance, real estate property taxes and other insurance obligations (i.e. flood, private mortgage insurance or PMI) on ALL loans defined by the FRB as ‘higher-priced loans’. These new rules also implemented a mandatory 12 month escrow requirement for people claiming live-aboard and/or full-timer status living in RV’s or boats.

Since most financial institutions service boats and RV’s on their simple in-house consumer loan systems, banks are not designed to handle these new mortgage loan type systems, nor would they want to. Thus, almost every financial institution has elected to cease lending for (RV or Boat) live-aboards or full-timers at all.

So, IF you keep your apartment as your primary residence (and are  not a live-aboard or full-timer !) the mandatory 12 month escrow period rules would not apply to your boat or RV loan. But, as soon as you talk about the vessel/RV as being a live-aboard, or, you can not prove a primary residence, then the lenders will back away from the loan.

Financing a boat is very difficult even with 50% down "if" you do not own "real" property.