Some fun with the "other" decorated boat participant, and the contest last night (the 22nd).

We are 300 feet away from Len and Kelly's boat, after the lights went on last night we could see activity on their upper deck, it was looking like some sort of animated-computer-robot thing, there was a 10 foot lighted staff with a red ball on the end, and what looked like a up-down lighted waving arm (similar to the new halloween life-sized figures that animate).

Later, while out in the mist checking things I heard loud yelling, and assumed it was their hailing system blasting out on deck.

Incident Report:
Attn: POS Security Cameras !
Kelly, this is in "fun" not serious.
Friday evening, In some sort of an aternative mind-zone, a deluded local boat owner morphed together the "Electric Cowboy" and a lance-carrying 12th Century Knight-in-armor into an obvious attempt to win the 2017 POS Boat Light Contest. 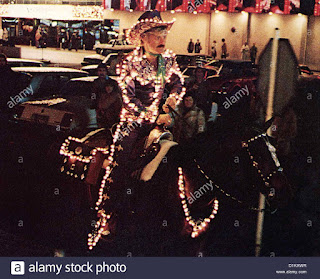 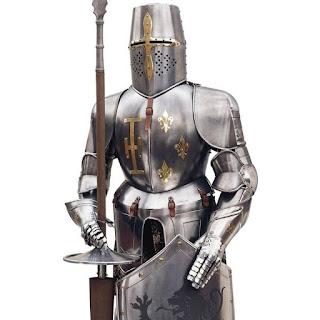 Teetering on a non-skidded fiberglass Bimini, in a misting Oregon rain, after dark, on a 40 degree December night, wrapped in electrified Christmas lights (we're not sure he was wearing anything underneath !), he began waving his lance and arms while shouting in a desperate measure to attract the favorable pity of the contest judges.
The judges (fortunately) were afraid he could be armed with more than one flask of intoxicants, and then managed to talk him back and down from the slippery edge . . . into the safety of the galley and hot black coffee by promising him a shared 1st Place win.
We are donating our $50.00 award value to the Oregon Coast Boat Owner's Mental Health Society, and wish him well on his recovery.
But seriously, our warmest and utmost sincere congratulations to Len and Kelly who gave us a real run-for-the-money (which isn't as much as our lights cost <s>), but, a yeoman effort by all, we got a real chuckle out of the Len image/antics, we honestly thought it was a computerized robot.  Happy Holidays,  (see tomorrow's blog for more, Sunday, 24 December)
very respectfully, an'ya and peter M/V So...fea
--------------------------------
So, the activity we could see  from here, was not a robot !
it was Len !

Had fun this year doing both of the light shows, but, the effort is high and the attendance super-low, so, next year is almost a foregone conclusion.
Without promotion, enthusiasm, sincere interest, and advance planning any event is not worth doing, an'ya put signs all around Florence about the show, and the POS did nothing.

We helped out this "new-kids-on-the-block" naive year , and learned a lot, but, next year, we are legal veterans.

Lit off again Saturday the 23rd 1730-2000, and saw 31 people view, for a four night total of 56 people ! (certainly not worth the effort of doing this for the public's viewing alone), and, it is highly questionable if anyone from the Port saw either presentation first hand (other than the judge) . . . using promotional photos should be a must here,  to promote the POS and future events, but, the landlubber based management attitudes here skip the logics of growth: doing advertising, promoting events, or encouraging and exploiting any boat pictures sporting huge signs that read "PORT SIUSLAW ROCKS !".

Another windy storm is moving in late tonight, so, we are spending Sunday tearing it down and stowing away anything on deck that swings, time to move on to "our" computer conversions and website redo's and finishing So...fea's new wiring circuits that I started on ages ago.

Some more light display photos are coming, and I will post them next week after Christmas.