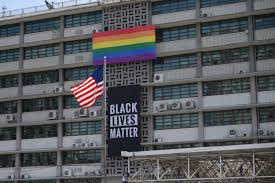 TODAY, ALL YOU NEED TO REMEMBER IS THAT

1 MILLION 300 THOUSAND AMERICAN WAR DEAD…. OVER A 250 YEAR SPAN, PAID THE SUPREME SACRIFICE TO ALLOW YOU TODAY'S AMERICAN FREEDOM AND SAFETY HERE AT HOME... ENJOY IT, RESPECT IT, IT IS IN PERIL.

MY VETERANS WEBSITE WAS BANNED, BUT, AS AN AMERICAN AND AS A VETERAN.... I AM DISGUSTED THAT NON-VETERANS LIKE JOE BIDEN, PRESIDENT OF THE UNITED STATES, AND THE SECRETARY OF STATE ANTONY BLINKEN HAVE ORDERED 163 US EMBASSIES, AND 93 US CONSULATES  WORLDWIDE TO FLY BLM AND LGBTQ COLORS (SAYING THAT EVERY AMERICAN OPENLY SUPPORTS THESE DOGMAS).

Almost every country (150+ of them) has it's own version of a Federally declared 'Memorial Day" that honors their war dead, those of us who are globe trotters have experienced these in many different countries (always by shock... what? a holiday? what about? an extra stay day, and never really knowing "what" the history of the country is, who is being "memorialized" or what the customs/rituals are, or why,  That's how we Americans roll when in a foreign land, ignorant, unaware, and irreverent.

Been to America lately? it is the same here.  We have a lot of "Holidays", we call them celebrations, parties, four-day-weekends, days off,  we generally see these as "family" days, mostly they are all devoid of purpose (other than drinking), and very few even know what a particular holiday is even about.

I worked a couple of years in situations that had around 50% International employees on work visas while we developed our NASA and Alternative Energy researches, their questions were endless... as they tried to debunk our slang, lifestyle, logics, food and customs (including holiday rituals).  I have heard the explanations, the understanding of what Americans think about Memorial Day.

Travelling around America and witnessing the holiday offers up a diversity of attitude and tempo, the somber, introspect, reverence bunch, and the " I dunno' ... and I don't care, lets party !" bunch.  But then again there are those who celebrate Pearl Harbor day, 911, and include all of the uniformed (1st responders) into Memorial day and Veterans Day honors as well, many Americans observe Memorial Day by visiting cemeteries or memorials, holding family gatherings and participating in parades. For most people, it marks the beginning of the summer season.

VA Directive: On Days of mourning like Memorial day flags go to 1/2 mast, On Memorial Day the flag should be flown at half-staff from sunrise until noon only, then raised briskly to the top of the staff until sunset, in honor of the nation’s battle heroes.
Oregon has four VA National Cemeteries, all are along the I-5 corridor, Eagle Point, (Fort Stevens) Hammond, Roseburg and (Willamette) Portland.
Sign up for free email notifications about new posts (at top right)