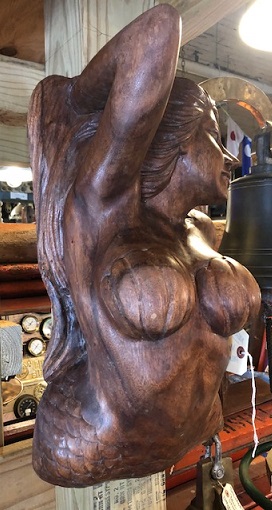 Now that I have everyone's attention...  big things do not always get a lot of attention, now, that could be for a lot of different reasons... big is not always "better", big is disgusting, or even big is expensive.

I posit that big is misunderstood... using the example of this sites email-out yesterday, which was a BCC 1150 address announcement about our return to the web with this site.  (which we felt was a "big" announcement).

Allowing for the impacts of American readers with Memorial Day, and many of our readers being preoccupied with Chinese invasion (Bhutan, India, Taiwan, and three-five more), other reattentioning going to the impacts of the virus, new mRNA research warnings, and new aversions to the "jab",  the politics, and much much more... we acknowledge that we here are "NOT" ... big.

BUT, there is another issue at hand, primarily our American audience (almost all) missed" the hyperlink in the last line (last sentence) of the page, which allowed access to the new site... my not seeing any activity from the Americans in 24 hours caused me to suspect more government deplatforming, censure, etc; I could see that the email was delivered and opened, but the non-response appeared as a "shun"...

So, I began contacting recipients to see why... astoundingly... the American viewers (only the Americans) did not see or know about that hyperlink... !!!!!  what ?

I have always cautioned about my high useage of hyperlinks (to save page space), so, I now wonder about the past five years of my postings and what readers missed.

please... use those hyperlinks, they are there to save space and offer up reference/documentation. 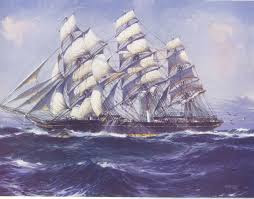 The famous 1860s tea clipper, and speedster tall ship, Cutty Sark has a rot-damaged figurehead (after 100 years of sea air exposure) at the docks of Greenwich London.  So, a new figurehead  was commissioned, a new sculpture, named Nannie.
The figurehead Nannie is one of the most recognizable parts of Cutty Sark. The name ‘Nannie’ comes from Tam O’Shanter, a poem by Robert Burns. The poem also was the inspiration for the ship’s name, Cutty Sark, which is also salacious. The poem tells the story of Tam, the farmer, who encounters a group of witches in Alloway Kirk – including the beautiful witch Nannie who is scantily clad, dressed only in a ‘cutty sark’ – an archaic Scottish name for a short nightdress.

The original figurehead, created by the legendary ship’s carver Frederick Hellyer, was damaged in a storm in the late 19th century. A new figurehead was installed in 1957, but this figurehead has suffered from environmental damage and rot.

Last year master carver, Andy Peters was tasked with bringing a new figurehead to life. Inspired to enter his profession after visiting Cutty Sark as a small boy, Andy has since had a fascination with tall ships.

Inspiration for the new figurehead was based on a drawing by the Cutty Sark’s original designer and builder, Hercules Linton, which was for the original design back in the 1860s. Using Linton’s drawing, the aim was to “produce a figure of the period, capturing the spirit of the age in which the ship was built.”

In the perilous life of a ship at sea, figureheads were seen as lucky charms representing the spirit of the ship, protecting the crew from harsh seas, and serving as a daily reminder of the women waiting for their safe return home… but large figureheads, positioned at the foremost tip of the hull, adversely affected the sailing qualities of the ship, leading to dramatically smaller designs in the 18th century.

Today figureheads are gone from all our merchant ships and have been replaced in the Royal Navy by ships’ badges, large plaques mounted on the superstructure with a unique design relating to the ship’s name or role. US Navy ships have unique patch designs that are often colorful and, and have in the past, included naked women and racially charged designs.

Salacious patches were banned from US Navy ships in the wake of the Tailhook Scandal in the early 1990s. Today’s patches must be approved by a commanding officer and “should use symbols to highlight history and mission focus“.

On June 11, the new figurehead (bare breasts andall) will be taken to the Cutty Sark and lifted by crane to be fitted to the ship. So far, gCaptain has found no evidence of any woke hipsters planning a protest, but that may change in the coming days.

Thanx to John Konrad (over @gCaptain) for supplying this information, here is more on this great ship... https://www.rmg.co.uk/cutty-sark/history 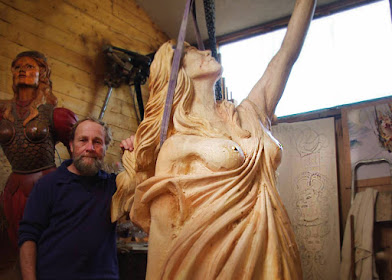