We posted earlier on here:   5 March 2019, 18 March 2019, 1 April 2019  about phenomena on the waters of the Great lakes that Ocean Sailors never experience.   This past week a different oddity was published by Fox News.


Ice volcanoes are a common feature in the winter months around the Great Lakes, over the course of hours or days, ice formed as part of the leading edge of an ice shelf build out into the lake, water squeezes upwards and tosses the floating ice up forming a cone, that resembles a volcano. 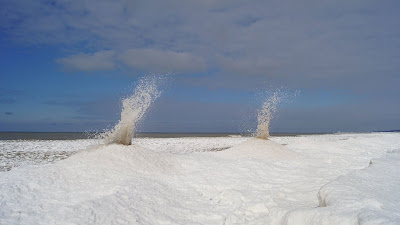 After the ice shelf has built out, ice volcanoes tend to form on shorelines where waves strike with some force, waves continue to travel underneath the ice and are forced up through cracks of the previously formed cones. ice volcano cones can range in size from less than 3 feet to greater than 20 feet high, with the largest cones typically near offshore sand bars and rock reefs. Despite having "volcano" as part of the name, they do not erupt hot lava.
Another lake oddity... "ice balls" was spotted Friday washing up as well. 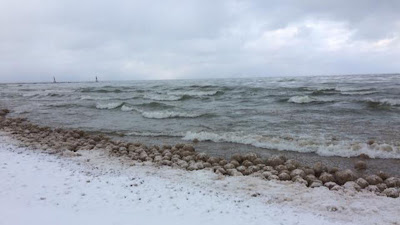