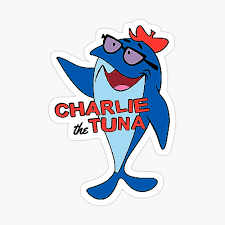 "I did !"   it was a pre-meditated, very well planned, secretive, GET RICH IN MY LIFETIME, deny everything opportunity ... and, I took it.

Now, 40 years later ...  it's possible they finally realize that Charlie is missing (note that I say "possible"), the people of this planet are simply ignorant, un-seeing, and complacent "who cares" humanoids.

By the way, while you were not paying attention, we also killed Carol Cod, Sammy Salmon, Al Abalone, Paul Perch, Louie Lobster, Carl Crab, Suzie Shrimp, Pamela Pollock, but our most important assassination was of Kristina Krill ... also ALL of whom have gone unnoticed.

You won't have the world's canneries and fisheries to kick around much longer though, even our in-water and on-shore fish farming future is doomed, but that is yet another topic to be discussed later (when you wake up and realize what s happening).

Here is a recap-update, back in the 1960's there were virtually no constraints on fishing, none, even self-imposed by the fishermen themselves... after WW and Korea, the electronic and machinery technology, and manufacturing were both very developed, everybody had a high school education, and the beef-pork-chicken eaters of the world were ready for a diet change ... seafood !

This was was third world edibles, primarily an Asian expertise, the only Europeans into these foods from the sea were the Greeks, Portugese, and Adriatic-coast Italians and Slavs.  In America, this was a 95% Japanese West Coast Industry until the internment camps of the 1940's, when all of the boats, canneries, and fish harbors were confiscated, and taken over by the mostly immigrant and first generation Adriatic-east Mediterranean fishermen in the big five (Seattle, Portland, San Francisco, San Pedro, San Diego).

The 1960 introduction of the Seine power block by Mario Puretic' out of San Pedro eased the man-power need to haul nets, and revolutionized the Tuna, Salmon, Herring, Anchovie, Mackerel, Bass, Sardine and Menhaden haul sizes per catch, and long quiet companies like French Sardine (San Pedro) became Star-Kist tuna, and Van Camp "Chicken of the Sea", and Bumble Bee ... and the Tuna wars began.

By the mid-1970's the rape was on in gang-bang styling, Super tuna Clippers with helicopters, Mother Ships, At-sea processing, Freezer ships, and going global as fish stocks began to run out, longer trips further from home, and, the game was on in every country.

Like any Industry, the corporate power structure protects itself from exposure, and will use any means (any) to cover up corruption, illegal activity and intentionally lie to deceive the truth, leaks and whistle blowers are severely dealt with ... my earlier comment applies here as well "the people of this planet are simply ignorant, un-seeing, and complacent "who cares" humanoids".

By the early 1980's those of us who were "observers" walked away when it became life threatening, but, still today the black balling of incident reporters and observers trying to manage ﬁsh sustainably by collecting data and by observing ﬁshing vessel operations is ongoing, and frequently observers simply go missing, after reporting these abuses.

Working closely with the Association for Fisheries Observers, WWF, the Global Tuna Alliance, US Coastguard’s Investigative Service (GCIS),  the Sustainable Fisheries and Communities Trust, Blue Marine Foundation and PNA Tuna, professional support, and current legislative actions by governments have created a TIPS app for protecting reporting incidents of unlawful activity that is then confidentially passed directly to USCG criminal investigators. This includes any US crime committed on or affecting the maritime community to include illegal ﬁshing, polluting the ocean, maritime smuggling of weapons, narcotics, money, or humans.

HERE IS A DOWNLOADABLE .PDF ON OBSERVERS

The Human Rights at Sea Organization welcomes any entity wishing to become involved and wanting to support their collaborative work by contacting HRAS via enquiries@humanrightsatsea.org.