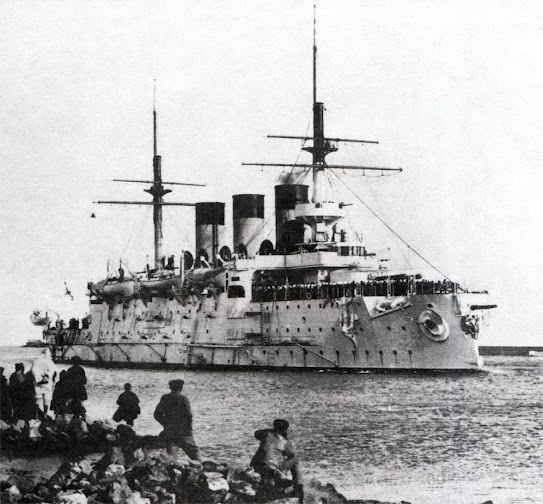 JUST NOT THE RUSSIAN NAVY,

Spoiler Alert: You "might" see some irony in here about "why" you need a competent head-of-state to make sound military and foreign affairs decisions ... (not that I am the least bit worried about "our" Commander-in-Chief potentially handling a Taiwan invasion, or a south China Sea ship sinking attack by China, a nuclear attack by North Korea, or a Iranian Gulf of Hormuz missile attack, or even a Russian nuclear attack by submarine), but here is what "can" happen.

If you are the least bit familiar with the Bering Sea-Russia-Alaska-Japan-and Korea's history, you know that beginning way back in 1647, Russia began developing the Pacific ocean coastlines and interiors of both China, Asia, and North America.

The Russian colonization of Alaska-Washington-Oregon northern California spanned 1732 to 1867, but, the Russian plan began faltering in around 1850 as a result of US pressure by granting California statehood in 1850, then Oregon in 1859.

So, Russia gave up, and the United States finally purchased Alaska from Russia in 1867, and chased them out of the North American continent.

No one ever thinks or speaks about where all those Russians went... after they left San Francisco and pulled out of California, the Northwest, the Yukon, the Panhandle, Anchorage, and the Aleutian Islands.

In 1867 when Russia removed themselves from North America to move back across the Bering Strait (50 miles away), they enhanced their older Asian developed cities and seaports spread up and down the coastline, spanning from the Arctic, down alongside Japan, to the Korean southern border ...  in 1731 the Okhotsk Military Flotilla (1731–1856) and Siberian Military Flotilla (1856–1918), had been formed to defend Russian interests in the Russian Far East region along the Pacific coast.
In 1867, Russia controlled the Chinese Yellow Sea area (Manchuria China) and the Korea's where for many years they built navy bases, military forts, cities, railroads and developed the natural resources like coal, logs, minerals and fishing industries, their biggest Pacific Army and Navy bases were at Port Arthur, Seoul and Vladivostok, they simply did not need Alaska or the northwest US any longer... so, they sold it !While planning the sale of Alaska, Russia annexed Manchuria in 1860, which sits northwest of the Korea's, and includes all of northeast mainland China, Russia began developing Port Arthur in the Yellow Sea bay as their warm water Pacific fleet Naval home base.

In 1860 Russia also developed the Pacific seaport of Vladivostok which was an operational harbor only during the summer (but Port Arthur could operate all year), by 1898 Port Arthur and Seoul were fully developed as Russian military bases, with 35,000 troops, 30 ships, and Vladivostok was used primarily as a commercial port.

Angry about the Korea's and Manchuria being Russian occupied, on 8 February 1904 Japan issued a declaration of war against Russia ... however, three hours before Japan's declaration of war was received by the Russian government, the Imperial Japanese Navy attacked the unsuspecting Russian 1st Pacific Squadron at Port Arthur, and Seoul  destroying it in its entirety.... it was a Russian Pearl Harbor...

A furious Czar Nicholas gave Russian admiral Zinovy Rozhestvensky some very stern orders...  he was to take his entire fleet that was based in the Baltic and Black Seas and sail them around the world to the Russian city of Port Arthur in the Manchurian Far East and destroy Japan (remember, at the time the Russian Navy was the worlds largest and most modern, with super-sized battleships).

All the war ships under Admiral Rozhestvensky’s command were coal powered and many of them, were new and had not been deployed before.  Taking a fleet of coal powered Navy ships around the world was no easy task in 1904... it required  500,000 tons of coal and 30 to 40 re-coaling sessions to reach Cam Ranh Bay Viet Nam, 60 colliers from the Hamburg-Amerika freight Line were pressed into service to make it happen.

The long winding sea route snaked from the North Sea around through the Strait of Gibraltar, across the Mediterranean, where they joined the Black Sea fleet out of Sebastapol, then, through the Suez Canal, into the Indian Ocean and on to the Far East and into the Yellow Sea.

But, the larger battleships were too big to navigate through the Suez canal, and had to go the old way, down the West African Atlantic coast and around the Cape of Good Hope, past Madagascar and into the Indian Ocean and East to Vet Nam for rendezvous with the other 1/2 of the fleet.

The purpose of this massive exodus of men, steel ships of war and coal was to revenge the Russian port attacks at Dalian,  Port Arthur and at Seoul, Korea, all three Russian naval seaports were on lease from China... but now in Japanese control.

The Russo-Japanese War had broken out early in 1904 and the Czar was, rightfully, worried that the remainders of his Far East fleet that had moved up north to Vladivostok, would not be able to hold off the Japanese on its own, or for very long.

After preparing, and upgrading the battleships, the Baltic Sea fleet did not depart until 7 months later... in the autumn of 1904, and then spent 6 more months sailing around the globe planning to meet up with the remaining Russian naval forces at Navy Base Vladivostok.

All told, the journey was 33,000 kilometers / 20,500 miles making it “the longest coal-powered battleship fleet voyage in recorded history”.

Such a large fleet moving across the world needing coal and food did not escape the notice of the Japanese, at that time, Japan and Great Britain were allies, and Britain denied Russia the use of any of its coaling stations, they also provided the Japanese with constant intelligence on the movement of the Russian fleet.

With 15 months of preparation, Japan was fully ready for the arrival of the Russian fleet, after a 20,500 mile 6 month cruise the Russian fleet was ill prepared to engage in battle immediately upon its arrival, many of the crew were fresh recruits and all of their training was based around the needs for combat in the North Sea and Baltic Sea, very far removed from the Sea of Japan, Asian warfare, and the warm Pacific climate of the Yellow sea.

The Japanese were not about to let the travel-weary Russian ships make safe port at Vladivostok to replenish, they planned their ambush to encounter them as they approached Vladivostok. The battlefield they chose was the narrow Japan Sea straits between Japan and the Korean Peninsula.

At dawn on the 27th of May, 1905, the Japanese fleet moved to engage the incoming Russian fleet, using their advantages in intelligence, preparedness and training, the Japanese fleet opened fire at long range and shelled the incoming Russian fleet. Less than two hours into the fighting the first Russian battleship sank under heavy gunfire, the rest of the fleet soon became crippled and were sitting ducks to incoming Japanese shells.

The Russian sailors were tired, untrained, and in strange foreign waters, the result was they barely put up a return-fight  to the Japanese attack.

When the sun set, the Japanese deployed small fast moving torpedo boats to move in and finish off the crippled ships in the dark, the Russians surrendered at early dawn on the 28th, less than 20 hours after their arrival.   Over the course of "one" day's heavy fighting, the Japanese Navy had destroyed the entire 30 ship Russian Baltic Fleet.

The result was an utter disaster, and a journey that ended in humiliating failure.

In the end, the Japanese sank 21 ships in total, including 6 state of the art battleships, they captured the remaining 7, and killed over 5,000 Russian sailors.

By comparison the Japanese Navy lost only 117 men... and no ships were sunk, or even took substantial damage.

The Russians had already lost their entire Pacific fleet earlier in February, and now, with the loss of their entire Baltic Fleet the Russian Empire was without a navy... and was forced to surrender to Japan.   It was a blow that sent shock waves throughout Europe and the world, the defeat of a major European power at the hands of an Asian nation changed the perception of the world's military balance for good, and, after already being severely hampered by the Crimean War in the 19th century,  Russia’s prestige was permanently damaged, faith in the Czar was ruined, and it was to never return.

The Russian people were so incensed by the defeat and humiliation that it led to the 1905 Revolution, a precursor to the Russian Revolution 10 years later.   Admiral Rozhestvensky was court-martialed and died just a few years later, the war ended in September 1905 with the fall of Port Arthur Army base, and the failed Russian Army invasion of Japan overland through the Korean Peninsula and Northeast China, The warring parties signed the Treaty of Portsmouth on 5 September 1905, and Russia agreed to evacuate Manchuria and to return its sovereignty to China, adding to the insult,Japan was allowed to lease the Liaodong Peninsula (containing Fort Port Arthur and Talien), and the Russian rail system in southern Manchuria with its access to strategic resources. Japan also received the southern half of the island of Sakhalin from Russia as spoils and damage.