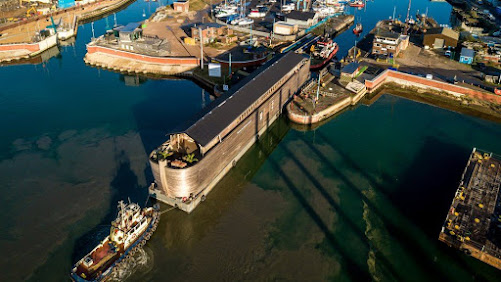 Every port Manager has one (or more) of these "accident-waiting-to-happen", Pollution potential disasters sitting around the docks, and most of them are impossible to be rid of (including the owner), we used to have two here in our tiny harbor, and one still remains.

Over in the UK, at Ipswich, this dilemma vexes logic, back in November of 2019 we got this in an email, but now it has turned into a "story". 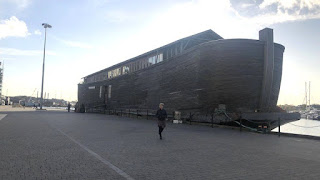 A 60 year-old Noah's Ark replica from Holland, has arrived in Ipswich, the owner said he wanted to create a "talking point" for people from all religious backgrounds.

Creator Aad Peters said the ship, was an "emotional and cultural" experience for visitors, not religious.

This is its first visit to the UK. Stories including Adam and Eve, Cain and Abel as well as the nativity is scene are portrayed on the ship.

The exhibits are primarily made up of carved wooden sculptures with a 12m-high (39ft) "tree of life" which "grows" through the four levels at the centre point of the museum.

Natural materials have been used as much as possible inside the 2,000 sq m (21,528 sq ft) ship to create a better environment for visitors. Peters, a Dutch TV and theatre producer, said: "We don't have screens to explain things. We want people to feel it, so it's like walking through an emotional experience."

"Life is about storytelling, if you understand life it's easier to live", he said.

He bought the ark in 2010 and a team of 50 expert craftsmen took five months to create the museum, which is thought to be about half the size of the ark described in the Bible.He said he created the exhibit out of a belief that "if you know your own stories, it is easier to understand the culture of others."

The 61 year-old museum was self-funded and had no links to any religious organisations, he said.

The ark is expected to stay on the waterfront in Ipswich for up to three months and will be open seven days a week to visitors.

In Ipswich, a giant replica of Noah's Ark has been deemed un-seaworthy and will be detained where it is docked.

In response to a Freedom of Information request made by the East Anglian Daily Times, the Maritime and Coastguard Agency (MCA) said the vessel was not safe to leave due to "deficiencies".

The BBC has approached the ship's owner for comment. A spokesman for the MCA said: "The vessel, Noah's Ark will remain detained until all the deficiencies have been put right and a Maritime and Coastguard Agency surveyor is invited back by the owners to check that they have been corrected."

He said he was unable to disclose specific details of the deficiencies.

And now this... in last weeks Coast Guard report from Ipswich, the situation still survives.

A Dutch replica of the biblical animal-rescuing ark has been held in the UK for 19 months because it is deemed unseaworthy — sparking a diplomatic spat and $700-a-day fines, according to a report.

The 230-feet-long floating museum made a rare trip out of Holland in November 2019 to dock at Orwell Quay in Ipswich — where it was impounded by coast guard officers who refused to let it sail away, according to official documents obtained by the Ipswich Star.

“We do have concerns about this vessel and we cannot rely on the grace of God that it can be safely towed to Holland,” officials from the Maritime and Coastguard Agency wrote in the documents.

They cited the $3.7 million ark being 61 years old, as well as it lacking necessary certificates and information about its weight and stability, the report said.

The ark’s owner, Dutch TV producer Aad Peters, said the vessel had been permitted to make previous trips because it is a “non-certified floating object” not required to comply with international regulations.

He has complained that he is now in an “impossible stalemate” where he is being fined for not leaving the UK — but also forbidden from setting sail.

The Dutch government has been lobbying the UK Transport Secretary as well as the UK’s Foreign, Commonwealth and Development Office, the report said.

“There is only one ark in the world, so let it go,” a former MP in Holland pleaded with UK counterparts, according to the paper.

Ipswich MP Tom Hunt said the diplomatic issue appears to have “hit a bit of a brick wall,” however. 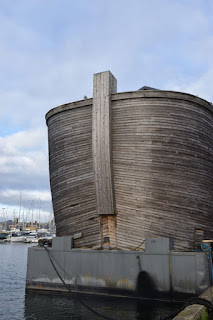 “It’s a very strange and unusual issue to crop up,” he told the local paper. “We’re working with the Dutch authorities and are trying our best to get it back to Holland one way or another.”

A spokesperson for the UK Department of Transport told the paper that it was “aware of the situation” and “in discussions with relevant agencies in the UK and the Netherlands.”

The MCA insisted that “Noah’s Ark will remain detained until all the deficiencies have been put right and an MCA surveyor is invited back by the owners to check they’ve been corrected.”