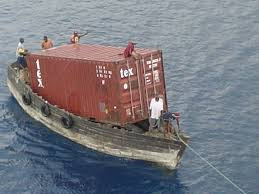 Brendan Murray over at Bloomberg writes that  Ports around the U.S. are rolling out J & J vaccines for seafarers, extending a lifeline to thousands of mostly foreign workers who’ve spent the pandemic isolated aboard ships ensuring container goods kept trading across a battered global economy.

From Boston to Houston and Los Angeles, and even in smaller trade gateways like Gulfport, Mississippi, local health officials and nonprofits are boarding container ships, tankers and other cargo carriers to administer Covid-19 shots or, when possible, shuttling crews to nearby pharmacies and clinics.

The preferred vaccine for maritime workers: the one-dose Johnson & Johnson shot because they’re often docked for just a day or two.

In Los Angeles and nearby Long Beach, California, home of the nation’s largest port complex, a vaccination program that began in mid-May has reached about 500 visiting sailors on 11 container ships as of late last week, city spokeswoman Chelsey Magallon said.

Similar efforts are getting under way at nearly 50 other U.S. seaports, according to a list maintained by the North American Maritime Ministry Association.

Throughout the pandemic, seafarers have suffered a doubly harsh form of cabin fever. Travel restrictions prevented crew changes, forcing many to stay aboard beyond their original contracts and the 11-month limit set by maritime law. They’ve also been banned from disembarking in port for fear of spreading Covid or putting their vessel into quarantine for a week or more at the expense of millions of dollars.

“That’s a very big deal for sailors because they are essentially stranded aboard ships,” said Dick McKenna, president of the International Seafarers Center of Long Beach-Los Angeles, a hospitality club that offers logistics on land like Wifi, shopping or health-care services. “Some of these guys have been out there for like a year — the suicide worry is high. The shots are a really big boost.”

Some sailors are stepping foot on land for the first time in nine months or longer.

“We are on a continuous rotation between six ports in the USA and six ports in Brazil and one in Argentina and Uruguay — a vaccination would help us a lot,” Ingmar Koal, the master on board the container carrier the Northern Majestic, wrote in an email to Pierson on May 18 as the ship approached Philadelphia.

For crews who might come from Eastern Europe or Southeast Asia, there’s an economic incentive to get a vaccination card.

“That card and paperwork are going to make them very marketable,” said Stefan Mueller-Dombois, an inspector with the International Transport Workers’ Federation in Long Beach. “Their company will want them back or they can find another ship to work on really easily.”

In other parts of the world, more Covid outbreaks have stricken crew on ships and once again closed off some ports, particularly vessels carrying Indian crews or having recently traveled to India.

That’s why a global vaccination program supported by a number of governments is key to resolving the crisis at sea, said Rene Kofod-Olsen, chief executive officer of ship and crew manager V.Group Ltd. The company recently completed its first vaccinations in the U.S. — 13 Indian seafarers aboard the Cabrera in Port Everglades, Florida, received jabs during a stop there.

China and Russia have offered doses to their domestic maritime industries, and U.K. officials have offered them to British fishermen. The Netherlands is launching a program starting in mid-June, available to seafarers on vessels flying the Dutch flag. Australia has vaccinated a small number of foreign deckhands that transport gas between the nation’s ports on a ship that’s under charter to energy giant Origin Energy Ltd.

Zuidema estimated that 4,000 seafarers have been vaccinated around U.S. ports in recent weeks.

But, in the US Military, the Navy and other services work to convince and educate the ranks that the science behind the Pfizer and Moderna vaccines is sound, and that the shots are safe and effective in protecting themselves, their shipmates and their loved ones.

Because the federal government has authorized both vaccines only under an emergency-use authorization, the military cannot mandate that troops get the shots, though Navy leaders have suggested in recent weeks that they plan to force inoculation in the future.

According to a message to the fleet last month, a third of sailors offered the vaccine declined to get it, a rejection rate that tracks with what officials say they’re seeing all across the military, it was pointed out that, while the Moderna and Pfizer vaccines were developed very quickly since COVID exploded across the world roughly a year ago, and although not FDA approved, the modified mRNA technology behind the vaccines has been in development for years.

The Johnson and Johnson Vector vaccine (single sot) is being accepted at a 95% rate, and seems to be the way forward. Here in the US the Biden Adinistration is pushing the mRNA two-shot version of the gene therapy vaccine, and running into aversion as the global scientists and virologists continue to release their previously ignored danger warnings.

The mRNA and the Vector single-shot are both being tested in the field in an attempt to gain FDA approval for human use, the current research coming out, but, the mRNA gene Therapy idea does not bode well to ever qualify as a true "Vaccine" per Western medicine and FDA standards, it is a "gene therapy'.

Still out in the cold are the sail boater/motor yacht world cruisers, may of whom are trapped due to legalities and a lack of either Covid inoculation even being available.