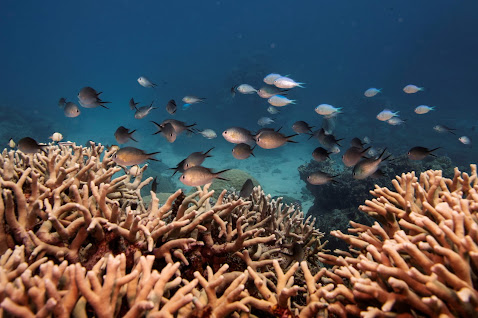 After Hurricanes Irma and Maria demolished the Caribbean islands in 2017, the populations (abundant populations) of colorful varieties of fish, sharks, sea turtles, underwater groves of plants and seagrass ... and, even the coral were all gone.

The continuing trend of warmer atmospheric temperatures and the sea level rise from melting polar ice add to these more frequent, destructive tropical storms,  ocean acidification, oil spills, plastic and net debris, ships ramming the reefs and tourists diving and destroying them looking for a souvenir to take home all impact.

The same issues plague the Great Barrier reef in Australia, and others around the world.

A project, known as Ocean-Shot, was announced Thursday at the Global Citizen’s Forum funded by U.S. (Washington-based) entrepreneur John Paul DeJoria (the co-founder of Paul Mitchell hair products), copies the design and shape of natural reefs into man made  modules that provide opportunities for colonization by corals and other marine life.

From the Caribbean to the western Pacific, the effects of climate change have led to coral bleaching, a worrying uptick in ocean acidification and allowing hurricanes to destroy reef barriers, It takes a full year to regrow a one acre reef bed, the Ocea-Shot modules will allow a coral nursery to regrow several species that will eventually populate the new reef replacement.

Coral reefs support more than 25% of the seas marine biodiversity, including turtles, fish and lobsters, which fuel global fishing industries, and feed populations, the reef is like an apartment building, with different species living on each floor from the basement up to the penthouse.

Coral reefs mitigate sand flow to beaches, replenishing the sparkling white beaches that make the Caribbean a global tourist hot spot. The sand itself is thanks to coral and a very important local species that feeds on it.

the coral reefs enable people to set up homes and businesses closer to the ocean, by protecting the shore from high tides and water walls from storms.

If the world’s remaining reefs continue to die, Brosnan predicts a major financial impact on fishing and tourism that island nations rely upon, which could fuel migration to more developed countries, the coral reefs enable people to set up homes and businesses closer to the ocean.

It’s a real concern as to where you can live if the coral reef disappears, how you can make a living if the fisheries are gone and where you have to move to now,” she said. Here on M/V So...fea dot com we have reported on the many fishing and cargo ships ramming the reefs, and polluting the waters in reef areas before, as we rely more and more on the sea for food and supplies, this is a very overlooked ecology issue.

The Great Barrier Reef stretches along Australia’s northeastern coast and is the only living structure on Earth visible from space. It is the world’s largest coral reef and a major tourist draw.

The conservation status for Australia's Great Barrier Reef has declined from "significant concern" to "critical" due to increasing impacts associated with climate change, The process of coral bleaching occurs when water is too warm and the algae the corals expel from their tissues cause them to turn completely white.

In addition to the Great Barrier Reef, the islands and protected areas of Mexico's Gulf of California have also entered the critical category, the report found. It was included in the List of World Heritage Sites in Danger in 2019 due to the imminent extinction of endemic vaquita, which is described as the "world's rarest marine mammal."

Here are some links to reef builders ideas around the globe,