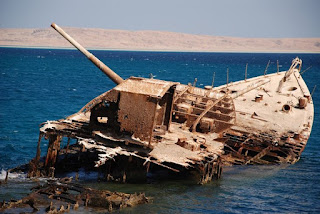 Our pals over at MarineInsight, and from the WWll Warbook have info on this intentional "dump it overboard" activity, places like Truk Lagoon, where back in 1969 Jacques-Yves Cousteau produced a documentary, showing the ghostly fleet of about 60 ships and 275 aircraft, still fully loaded with fuel and cargoes of tanks, bulldozers, weapons ammunition, aircraft, bombs and supplies, all simply left to nature. Truk is only one of 30 or so ocean sights of the same size (all are secretive and never admitted to by our Navy).
https://www.marineinsight.com/environment/10-largest-ship-graveyards-in-the-world/
Warships lost Source, John Ellis WWII Databook
USA
11 Aircraft Carriers
2 Battleships
10 Cruisers
71 Destroyers
10 Escorts
53 Submarines
UK
8 Aircraft Carriers
5 Battleships
30 Cruisers
110 Destroyers
58 Escorts
77 Submarines
Japan
19 Aircraft Carriers
8 Battleships
37 Cruisers
134 Destroyers
130 Submarines
Germany
9 Battleships
7 Cruisers
44 Destroyers
785 Submarines
Italy
1 Battleship
11 Cruisers
84 Destroyers
84 Submarines
Merchant Ship Losses
5093 Allied
2943 Axis
Aircraft lost into the Sea    200,000  all nations

Absolutely gorgeous January Sunday here ... Today, overcast, but no rain. out on deck sorting and cleaning up the winter mess from November's 2016 Christmas Light Contest (that we won),  we rebuilt the old swim deck ladder into a removable 01  level access ladder on the fantail, the boardwalk was a nutso' busy overwhelm of people all day long, and the dock walking landlubbers were out in full force.
-------------------------------------------
When water was invented, Nature must have been intended it to hide things that were unwanted, or unsightly, make it a place to get rid of things that were dead or never wanting to be seen again (ever) _____ Out of sight out of mind was invented right here.

Man has been throwing discards into the water for thousands of years . . . splash! gone... out of sight. no one cared, everyone did it, and still today . . . absolutely no one will admit it.

As mankind now tries to figure out what to do about ocean pollution, acid, and plastic, global warming, marine life, on and on . . . we get to listen to all the "green" talk, save-the-planet, and alarmist stuff.

One of the sad exposures of spending full-time in/on the water is your exposure to seeing what "really" goes on in a harbor, or around boats at sea. Only if you work on the docks or onboard a boat, or live-aboard can you have this kind of awareness ... and even then, you have to be aware enough to "see" it.
https://www.livescience.com/15492-underwater-shipwrecks-gallery.html

Beginning back in the 1950s all of this same awareness, all of this concern and knowledge was in place, being ignored, and even ridiculed when mentioned or published. I for one quit even volunteering details due to the snickers and giggles always received (even as late as in the 1990s).

Growing up on the Great Lakes industrial cities the stories were rampant about "where" all the glut of built and warehoused product and equipment "went" to after WW2 . . .  it all disappeared.... the manufacturing overrun was so out of control that when the war ended the glut was simply "disposed of" . . . the great lakes bottom holds a lot of stories,  jeeps, tanks, and trucks in the thousands simply disappeared from the lots and streets they were stored on, components, assemblies, spare parts, and inventories choked warehouses that now quickly needed emptying to return the spaces to civilian use.... they emptied out almost overnight.  There was no such thing as surplus. and no one asked questions.   many many stories, no listeners.

The fantail area would be staged on Wednesday late-night with 4-6 pickup truck loads of debris, and the port/starboard hangar deck aft passageways closed off, at daybreak, it would spread for miles behind us.

We did not macerate garbage back then, it was dumped daily overboard after being carried up from the mess decks, and again would spread for miles, between the officers, chiefs and crews mess there were some 20 50-gallon cans daily.
1/4ly . . . massive mostly new-in-boxes, spare parts, tires, and storeroom goods were dumped overboard, being on allocation budget meant "use" dictated the allocation of the next 1/4rs monies, so,... there is far more to tell, but, you get the idea.

We were only one ship in the 500 ship navy, do the math. out of sight, out of mind. The allocation system was nuts.

​Today MARPOL specifically targets accidental and operational discharges from ship operations, IMO also actively addresses marine pollution from land-based sources, albeit indirectly, through the London Dumping Convention and Protocol on the dumping of wastes and other matter at sea. The London Protocol, adopted in 1996, adopts a precautionary approach, prohibiting the discharge of wastes at sea except for a few on a permitted list, such as dredged material.

The London Convention/Protocol regime also contributes to climate change mitigation by regulating for carbon capture and sequestration in subsea geological formations and providing regulations and guidance on how to assess proposals for marine geoengineering. Read more here.