When China fell to the Japanese in WW2, the Chinese government moved from the mainland to Taiwan under US protection, the United States and the Democratic Republic of China (Taiwan) signed a mutual defense treaty in 1954 in which the United States would provide protection for the Democratic ROC ally in case of invasion by the Communist People’s Republic of China (PRC) on the mainland.

The treaty was approved by U.S. President Dwight Eisenhower and Taiwan’s president Chiang Kai-shek and was fully ratified by their respective legislatures. The terms of the treaty committed the U.S. government to deploy land, sea, and air force to protect DemocraticTaiwan from Mainland Communist China.

The U.S.-Taiwan Mutual Defense Treaty was a result of China’s civil war in 1948, and concern about communist expansion (after Communist North Korea attacked pro-Western South Korea in 1950), The treaty stipulated that the Democratic ROC and the United States would aid each other to resist an armed communist attack against Taiwan’s territorial integrity.
In September 1954 the Communist PRC attacked the pro-Western ROC offshore islands, and, the United States sent the Seventh Fleet to patrol the waters of the Taiwan Strait as required for its defense.
Following the 1954 crisis with the Communist PRC, the United States became concerned that the Democratic government of Taiwan might deploy force against the mainland, which could possibly involve American troops due to the treaty’s nature, so,  United States Secretary of State John Foster Dulles met with Democratic ROC president Chiang Kaishek to urge against attacking the Communist PRC mainland.
An incident occurred in 1958 when the Communist PRC shot down two Taiwanese F-84s on patrol. The PRC also renewed attacks on the offshore islands in midsummer 1958, testing the commitment of the United States to the treaty.
In response, the United States deployed an aircraft carrier battle group to the region that included combat aircraft and Destroyers to escort the Taiwanese forces to safely resupply their offshore islands.
Throughout the 1950s–60s the United States remained sympathetic to the cause of the Democratic ROC but also acted to restrain the ROC from actions that might provoke the Communist PRC (WHO, AT THE TIME WAS STILL CONSIDERED "WEAK").
Beginning in 1971 the United States began to negotiate with the Communist PRC, and theDemocratic China was dropped from the United Nations for Communist China representing “one China”. In 1972 President Richard Nixon visited Communist China. The visit culminated in the Shanghai Communiqué in which China declared that Taiwan was a part of China, and not Independent,  and that differences should be resolved by the two China’s only.
The fall of Democratic South Vietnam in 1975 to the Communist North Vietnamese, and our exodus from Southeast Asia play in here secretly, and in some Political (always unspoken about) manner.
In 1978 President Jimmy Carter established formal diplomatic relations with the Communist PRC (ONLY) and effectively severed all relations with the Democratic ROC thus forcibly ending the U.S.-ROC Mutual Defense Treaty in 1979.
I was aboard the Aircraft Carrier Ticonderoga during the 1961 Quemoy-Matsu Island conflict, and later received from the ROC a Mutual Defense Award Certificate and medal/ribbon set. “To express their appreciation, the Taiwan Ministry of National Defense of the Republic of China awarded the “U.S.-R.O.C. Mutual Defense Commemorative Badge” to  all American soldiers and sailors who served in Taiwan during the period of 1955-1979 in maintaining the peace and stability across the Taiwan Strait, against the PRC. 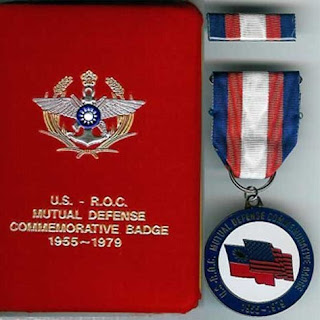 IMHO… out of Political embarrassment from consistently abandoning Asian allies to the Communists (the Vietnamese and now the Taiwanese), a CYA Taiwan Relations Act was enacted by the U.S. Senate in 1979 authorizing nonofficial relations with the ROC, that also provided for the U.S. sale of weapons to the ROC, and the US relationship with Communist China has been strained ever-since.
Now, 41 years later, we are formally recognizing only the Communist mainland, yet still covertly selling warplanes and military support to the Democratic Taiwanese... much like the situation in hong kong, where we and the five eyes all support the Democracy of a colony within mainland Communist China… in neither case do we have a legal treaty. The population of Communist China is 1.4 Billion, and Taiwan has 25 Million people, with Hong Kong at 8 Million.
As this China conflict arises, some decisions must be made.