Being a person who writes in demonstrations and hyperbole, oftentimes misdirecting an example to make a point, or to allow a different perspective-ponder... (only because many people are visionless, or self--serving flat thinkers), I sometimes must even get harshly candid (to reach knothead readers). 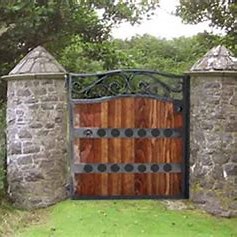 In my family, we had two aunts who were Bakers, around the end of December, usually before/with American Christmas on around 22-25 December, Winter Solstice hits... called Yule or Koleda in Pagan-times this was the signal to get wit Grand Ma and start baking for Orthodox Christmas on 7 January.  (remember Orthodox do not give presents-only baked goods/food/drink which suffices abundantly)

There were three ways this baking happened, one was to get these three together in one house..(using one oven 24 hrs a day), the second was for everyone to stay home (using three ovens), and the third was to use the church hall ovens.

Doing the latter meant baking twice the amount, and donating half to the hall (lotsa' work and extra money)... a few years the Serbian Sisters' group added people and money in for a monster bake-off to raise money--and everyone took home what they needed.  But my family baked different products than the church did, and we were miles apart so, the ritual usually was usually accomplished at all three homes separately (which meant large over-runs of the same family favorites).

After the deliveries were made to alter neighbors, and family, the bulk was readied for the big family Christmas get-together at my grandparents' house on 7 January...  the three bakers were supposed to each make specific items... but bakers cannot follow instructions, so we would end up with 15 or so pastry varieties stacked in 12-16 inch high platters.

With all the smoked meats, sausage, and spit-roasted pig, potatoes and bread... adding in the pastries and Slivovitz made for an all-day all-night eat-fest wore than American Thanksgiving.   For a few years, we invited outsiders to join in... and here starts my hyperbole.

My favorite is poppy seed kolach, every year when we headed back home I would have one or two 12 inch logs of it to take home (after eating two other logs on Christmas myself), and the rest of the family would each take home their share as well.

One particular year an "outsider" stuffed a large shopping bag full of 12-16 foot long rolls and took them back to their car, there was no poppyseed kolach for Christmas, no kolach for my family, and certainly no kolach for me... it was headed off to somewhere else. I never forgot.

Today, I went to pick up my Kroger food order... the Out-of-stock list was shocking, I asked why, and learned that the food orders for the Oregon coastal Newport-Florence-Coos Kroger stores are built around "Local usage, when "outsiders car training from Eugene, Cottage Grove load up their Subarus with products daily... there simply is nothing left until the next order comes in.

Even in "normal' times on holidays we here on the coat experience complete product wipe-outs at our grocery stores bottled water, meats, beer, wine, liquor, fresh vegetables, and ramdomthings like bread, charcoal, etc.   Outsiders simply take product away from the locals.

We are in no-holiday rainy weather winter/spring here, this is the third episode of shortages being blamed on outsiders stripping the shelves. order the maximum allowed of three roasts from the pick-up for 0700, and a second order for three at the pickup for 0900, between pickups, get three at the meat counter and have the wife follow you with three more through the cashier, then both do the same at the computer-self-check out,  that's 18 roasts... your two neighbors are with you in the car as well, so you all empty the Florence store of all 45 roasts in one 2 hour time-span !... not to worry, there will be another truck next Tuesday overnight (the meat manager told me).  we will be back Wednesday morning  !