Back on the water in Florence, it is day 45 of COVID-19, the latest astonishingly "NEW" knowledge... (that is sarcasm) from the CDC is that our clothes and shoes can transmit the virus further than a sneeze !!! wow ! this group impresses me... back to the 1952 Army films glowing boot prints again, or maybe they read https://www.infectioncontroltoday.com/environmental-hygiene/shoe-sole-and-floor-contamination-new-consideration-environmental-hygiene.

The Academy of Military Medical Sciences in Beijing, China have found there may be another way coronavirus is transmitted. The team took swab samples from 39 coronavirus patients at Huoshenshan Hospital in Wuhan, the Chinese province believed to have been the original epicenter of COVID-19.
They also took samples from the hospital floors, air, bins, handrails, patient masks, medical equipment, and staff shoes.
The researchers found at least half of the samples taken from the shoes of ICU staff tested positive for coronavirus, as did sample from the floor.
The team also discovered a 100 percent rate of positivity from swabs from the floor in the hospital’s pharmacy where there were no patients, suggesting medical staff likely tracked coronavirus on their shoes.

Floor samples also tested positive for the virus, which could be because gravity causes most virus droplets to sink to the ground or medical staff is accidentally tracking the virus around with their shoes – a possibility that is evidenced by a 100 percent positive rate for samples taken from the pharmacy where no patients were present. Additionally, nearly half of the samples from ICU medical staff shoe soles tested positive, suggesting that shoes could serve as carriers.
We talked about this a few weeks ago here, but, it sort of got snickered at.

--------------------------------------------------------
Locally, today's last order for Fred Meyer has worsened since our order of three days ago... now the beef is Gone ! no paper towels (at all), and many items are unavailable,
Smithfield Foods, the world's biggest pork processor, announced on Sunday it is closing its Sioux Falls, South Dakota, plant indefinitely.
The plant employs about 3,700 workers, and 238 are now infected with the COVID-19 coronavirus.
Perdue Farms processing plant in Delaware temporarily closed for a “top-to-bottom” cleaning after employees fell ill with the novel coronavirus, and the Tyson Foods facility in Iowa was also forced to suspend operations after more than two dozen workers tested positive, another Tyson facility is under investigation following an outbreak in Tennessee.
In Colorado, for instance, nearly a third of the workers at JBS USA, a beef processing plant in Greely, and the largest employer in its county, has since temporarily closed, following the death of two employees.
Reduced nation-wide production so far has been offset by the significant amount of meat that was in cold storage, and producers are working to shift meat that would have gone to now-closed restaurants over to grocery stores which disguised the problem to buy a little time, but now, we see it in the supermarket. The (FDA) has said that the country's food supply is not a source of transmission for the coronavirus, but the closures are likely to rekindle questions about food safety and how the virus can spread.
----------------------------------------
Back on the 9 April post, I talked a little about "2nd World" living...

Perhaps the biggest problems Americans have is being detested around the world, we are an arrogant, precocious, wealthy, and uneducated lot, with few social graces.

Seasoned American travelers have all sat through and been exposed to embarrassing, demeaning and humiliating public exposures of Americans showing off their "Ugly American" side (which is how we got the moniker).

What our uneducated American masses cannot seem to understand or appreciate, is that many 2nd world-3rd world cultures have in the past been the 'top dog" society of the day (in medicine, technology, engineering, wealth, and warfare)... we Americans look at them all as groveling uneducated peasants who don't speak English and live in huts.

For many centuries various colonists ventured into these natural resource-laden Central/South American-Karibe countries and enslaved, killed or made laborers out of the locals, while getting rich.  During the more relevant 20th Century, OIL was one of the largest money-makers, from the Cleveland based Rockefellers through today, it is the great oil ride.

The oil fortunes roamed around from Ohio to Oklahoma/Texas to California, and Kuwait  ... until the "big" oil fields were found, in Saudi Arabia and Venezuela during world war 2, but those did really not start development until around 1950.

The little known but larger projects like, Kennecott Copper (US and South America), Maracaibo oil, and a few others were "missed" by the rush to ARAMCO crowd.

After Navy exposure as a teen-ager to Asians, and a youth spent in a European upbringing and society (Cleveland), as a young person entering the Job/Career market, I was absolutely averse to anything Islamic, Asian, or otherwise.

Most people today are not aware that almost all of the Central/South American society and business is/was European (not native, Mexican or Latino) based.

The British, Dutch, German, French, and Spanish, and especially...  Jewish had settled, developed, invested, and created almost all of the infrastructure that these countries had in place 1500 through WW2, the thinking was not Asian, not American, but European... (as were the players in power, and those behind the purse strings).

Transitioning my machinery career to Central/South American thinking, concepts, engineering practices and tempo was far easier than trying an alien Asian mentality/morality on.

The main players in 1965 were ESSO-Lago, Dutch Royal Shell, PanAm Petroleum, and Petroleos de Venezuela ... they are all now either gone, or changed so drastically, that a return visit would insult and devastate my memories, so, I stay away...   my "memory version" of the area is now just a fantasy.

I have many "sound like fiction" tales about corruption, revolt, snipers, armed jeeps (land rovers actually), graft, anti-americanism, coups, 200% inflation, dirty money, even more corruption, and about the "people" involved. 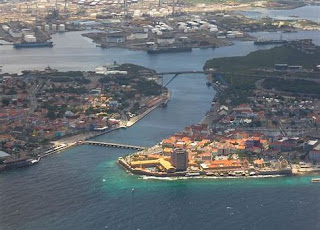 Most people have heard of these places, very few have actually been there (other than a one day visit on a cruise ship), and their past is very obscure to Americans.  So here... is more than you ever wanted to know about the Dutch Antilles, Oil, and Maracaibo.

Aruba was settled with a shallow open to the sea harbor at Orangestadt, but, Curacao had a militarily easy to defend inland deepwater natural harbor called the Schottegat with its town of Willemstad and St. Annas Bay, allowing Curacao to grow. This is still the largest Harbor in all of the Caribbean.

Willemstad's busy harbor area formed a melting pot of cultures, with seafarers from every corner of the globe gathering, incoming crews were paid off after each voyage, and It was then up to them to find a new ship out (many were slaves, freed slaves, or mulattos). Curaçao became the main base for Dutch privateers, and the island owed much to them for their protection against attacks by enemy pirates.

Venezuela gained full independence as a separate country in 1830, and in 1837 S.E.L. Maduro (Salomon Elias Levy Maduro) opened a Ship agency and Port operator company in the port of Curacao.

Way back in 1890, the main shipbuilder on Curaçao was S.E.L. Maduro. (a name I will mention often, and one that is currently running the dictatorship in Venezuela Nicolas Maduro).

Between 1914 and 1930 the Dutch Royal Shell built a refinery in Willemstad Curacao and became a major fueling station. S.E.L. Maduro & Sons Curacao shipyard was the world-best, and had been the largest supplier of coal, now, with its own water utility and ice factory, they moved into petroleum, banking, minerals and Insurance.. in 1926, the floating drydock Koning in Wilhelmina was built and Curacao claimed to be the worlds largest refinery.

Due to its shallow unprotected harbor the sister island of Aruba was not as safe or navigable, But, ESSO (Eastern States Standard Oil) had built the Lago refinery complex there between 1918 and 1930.

So, refineries, tank farms and tanker wharves were built on both islands, during the late 1930's Curacao and Aruba "both" laid claim to being the world's largest refinery... the Oil wars had begun.

By 1939, Curaçao was the world's seventh busiest harbor, and Aruba was not far behind at # 8, their refineries were the worlds number one and three in size, during the Second World War, the Maracaibo/Aruba/Curaçao oil industry flourished as never before. The Allied forces all depended entirely on Maracaibo refined 115/145 octane airplane fuels, known as 'Navy Special' avgas supplied only by the refineries of Curaçao and Aruba.

Because of the Panama Canal and their strategic war involvement, they both became military targets. a German  U boat torpedo attacked on the night of February 16, 1942 and sank four lake tankers, the Pedernalas, Oranjestad, Tia Juana, and the San Nicholas... seven great lakes type tankers were then built at Barnes-Duluth Shipbuilding Company in Duluth, Minnesota as replacements.

Combined with the Pearl harbor December 1941 attack, the United States now began reinforcing their protection of the Panama Canal, the Caribbean, and Venezuela, the Royal Dutch Navy and Dutch Army forces were placed under the command of the American troops who were now stationed in Panama, Aruba and Curaçao.

The Americans were to remain on the two islands until 1947, when the Dutch administration was returned, since 1950, the defense of the Antilles has been entirely in the hands of the Royal Dutch Navy. In 1952, ESSO-Lago, Aruba employed 12,631 workers, and Dutch Royal Shell in Curacao employed over 10,000  workers. The Panama canal employed some  10,000 workers as well.

Two huge bases were developed to support the military and the Oil refinery workers, and like in Panama, Brazil, Argentina and Peru, the impact of so many Foreigners was overwhelming and influencing, By the time I entered this area in the 1960's, English was the street language.   More tomorrow ...