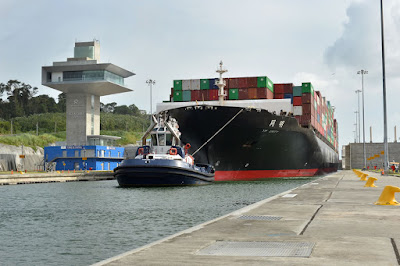 The Balboa Panama Tug Yard reports there have been thousands of layoffs all across the entire Canal Authority, due to COVID 19 contagion illness.
The canal is said to now be operating with a  1/3rd staff of 3500, versus their normal 9,000, and all workers not physically needed for ship transits were forcibly given two weeks of their annual vacation.   Panama itself has 1,075 cases of COVID19, the most in Central America, and seven + of their canal employees have tested positive for the disease so far.
The canal is looking out for signs of a slowdown at all American ports which impact traffic on the canal — from the U.S. East Coast to Asia route, but, the slow rebuilding of inventories in Asia by Chinese industry is potentially another sign of a slowdown.
Tugboat traffic was way down March, with fewer crew numbers now working longer hours because of a high number being in quarantine, talks with unions to increase shift lengths and reduce rotations are intended to reduce exposure and illness.