As I posted day before yesterday, https://www.mvsofea.com/2020/03/21-march-2020-day-21-of-covid19-oregon.html the activity here in Florence Harbor is busier than during any of the past three years of March business... today is much the same... many many people ! at times we have 30+ people congregated here , and the high walk around traffic is most unusual.  then this article hit this AM...Be sure to listen to both videos included below:
     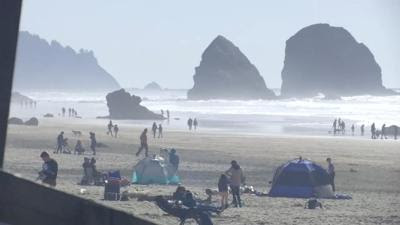 WARRENTON, OR (KPTV) – Despite Oregon Governor Kate Brown calling on all Oregonians to stay
at home unless absolutely necessary, the Oregon Coast and Columbia River Gorge were packed with
people Saturday. Social media was littered with pictures showing traffic headed to the coast and
crowded beaches.

The city of Warrenton sent a strong message to those planning a trip: stay home. The worry many who
live on the coast have is that COVID-19 will show up. Currently, no cases have been reported in that
part of the state.

The city declared a state of emergency, banned camping and ordered campgrounds to close. The city
also prohibited short term rentals, home stay lodging and told hotels to close.
There were exemptions to the order. Those at those different places were told to leave in the next 24
hours.

“Stay home. Don’t come here. You are not welcome of the period during this crisis,” Warrenton Mayor
Henry Balensifer said. His concern was the grocery stores on the coast were being overrun with
tourists and depleting shelves already running low. Another concern is the medical system on the
coast being able to handle and outbreak of COVID-19.

“We have to take care of our own first and foremost,” Balensifer said. “I can’t take care of everybody
else recreating people, this is not a time to recreate except for in your town.”
In the Lincoln City area, Larry Richardson told Fox 12 the crowds began to show up Friday.
“There are people all over the place,” Richardson said. “It’s one o’clock in the afternoon and here is all
ese hundreds and hundreds of people acting like they are on a vacation, on a holiday.”

The KOA in Warrenton sent a letter to the city in it they wrote they were receiving threats because of the
mayor’s proposal. The campground said they were taking all precautions and following CDC and state
guidelines.Granted by the power of the emergency declaration, Balensifer said, the order closes
camping at the city's marina, on private property and at its four campgrounds — including Fort Stevens
State Park, which has over 400 sites.

The Oregon Parks and Recreation Department, which originally said it would allow some campers to
stay through April 2, said it would comply with the city's order to close camping at the state park.
“We’re going to respect the city’s directive,” state parks spokesman Chris Havel said of Fort Stevens.
“Our intention is to do everything we can to work with them.”

The order also closes the city's hotels and short-term rental houses, such as those found on Airbnb,
Balensifer said.  There are multiple exemptions, including for camp hosts, employees and anyone “living
as a resident of the facilities."
"I understand some people are worried about trying to find a place to stay, but we're not charged to take
care of those people," Balensifer said in a video posted on Facebook. "It's hard enough to handle what

we have, we can't handle thousands of people flooding the city if one gets sick and it spreads."
Those who disobey the order — remaining in town overnight after a 24-hour period that began at 5 p.m.
Saturday — would be subject to a Class C misdemeanor. It is an “arrestable offense,” but Balensifer said
the goal was to make sure the order was carried out safely.

"We're giving the police department the ability to use common sense," he said.
Balensifer stressed that he’d spoken with county and state officials about the resolution, including senator
Betsy Johnson and Lisa Sumption, director of the Oregon Parks and Recreation Department.
“We didn't make this decision in a vacuum,” he said.

Other mayors on the Oregon Coast speak out

It is a crime our Florence area community could not respond as Suzanne Wheeler did in this video,
Tillamook Mayor Suzanne Weber posted a video Saturday asking "all visitors at the north coast on

Astoria Mayor Bruce Jones issued an even more pointed response, saying he was "appalled by the
sight of tens of thousands of irresponsible vacationers flocking to the coast, with callous disregard for
residents’ health and safety." that he was convening an emergency meeting of the Astoria City Council
Sunday "to consider an emergency measure closing commercial lodging to non-residents."

Meanwhile, Portland Mayor Ted Wheeler tweeted frustration about the crowds heading from Oregon's
largest city to the beach.     bumper to bumper traffic headed to the coast. Reports of block parties on the streets. I cannot stress this enough. #COVID19 continues to spread because people don't know they have it," Wheeler wrote.