EDITOR'S COMMENT:  This website is expressly intended to be an M/V So...fea based info-page, of commentary/research/opinions about the Motor Vessel So...fea, the Ocean, Boats, Harbors "and"  the liveaboard lifestyle.

That... "and the liveaboard lifestyle" comment mentioned above,  (means, anything that impacts or creates our liveaboard lifestyle), which is why you are seeing subject matter now appear on COVID-19 here, for us as Septuagenarians and the entire global marine live-aboard community, this event is urgent, we even have a signal flag for it. 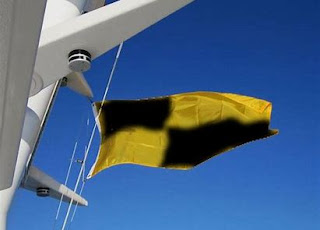 Our informational news sources are incoming from outside of the U.S. and are not aligned with or guided-controlled by, any "protocol" or "agenda" imposed by American entities.

The absolute two (2) most dynamic takeaways we are dealing with are the death rate, and the looming economic/financial disaster affiliated with COVID-19, in a twist, one impacts the other.

In doing a fast-forward (rather than hundreds of references and links), go visit  Wikipedia:  https://en.wikipedia.org/wiki/2019%E2%80%9320_coronavirus_pandemic

In mid-November some persistent order shortages and unfilled backorders had Western Manufacturers going in-person to China for fixing, the plant absentee rates rang the first bells. The first confirmed COVID-19 case in China was traced back to 17 November. As the virus spread, more and more impact was felt on manufacturing (to the point that it was being felt in the shipping-export traffic), that awareness was online in early December as container ship traffic began to show it.

Chinese warehouse inventories carried them through the Western Christmas-New Years seasons but left them badly depleted for January 2020 and beyond, on 3 January only 45 were reported as infected in Wuhan China ("reported"), the information now seems to be badly skewed downward.

2 January, The Hospital of Wuhan bans its staff from discussing texting or recording the disease publicly.
14 January,  Reporters were taken to the police station after trying to film the situation within Wuhan.
23 January,  The city of Jingzhou was quarantined, 35 million are now in quarantine.
24 January, All 70,000 Chinese cinemas were closed until further notice.
25 January, All inter-provincial bus and train services were halted starting 26 January.

By the first of February, Singapore began with articles like this; https://www.straitstimes.com/sport/wuhan-virus-epidemic-wreaks-havoc-on-chinas-sporting-calendar

On 1 February 2020 almost every country on the planet banned travel to-from China, and had cases of the virus "in-country',  China had 10,000 cases (reported).
9 February, China (Mainland) now confirmed a total of 40,213 cases (reported).
28 February, China reports having 79,251 cases.
29 February, Oregon has its first presumed case of coronavirus in Washington County.1 March, the COVID-19 story begins here at mvsofea.com and at: Oregon Health Authority where you can sign up for their daily email auto-updates.

I "assume" you have read the earlier mvsofea.com (1, 2, 7, 10 & 11 March postings that preceded today), for many dubious reasons we in America are very far behind on understanding about COVID-19 events, hence, the next few days entries will be very large in order to bring you up-to-date.

By intentionally trying to avoid "political sides" here, personally, it is an insult when the media and the government "both" are less than truthful about the goings-on, distort, or withhold full details of a situation, in this case, we were simply lied to and put into harms way by lies to (most likely) protect the economy from panic.  So let us dispel those lies first.

The biggest lies were apparent to anyone familiar with basic science, but since the very onset of COVID-19, the public has repeatedly been told ... the virus IS NOT airborne, and was ONLY transmissible person to person via coughing or sneezing ... WRONG !

Now, the American media is stating what has been said in Australia and Asia, India and Africa for three long months !! COVID-19 "is" transmitted person-to-person, BUT... is also transmitted Airborne, waterborne and fomite (meaning via clothes, paper goods, and hard surfaces).

Princeton University has found that the Coronavirus can, in fact, survive on its own “up to 9 days” at a time, up to 4 hours on copper, up to 24 hours on cardboard and up to 2-3 days on plastic and stainless steel, the virus can remain viable in aerosols for multiple hours and on hard surfaces up to 9 days, by comparison, the flu virus can only live on surfaces for approximately 48 hours.


Most likely,  this wrong information was released to avert panic, end a problem, to calm a situation, or just be downright "propaganda", but in today's well educated, informed, digital populace only truth will carry the day, fabricated unsupported, mysteriously timely or simply "fake" exaggerated reporting is obvious and should be criminal.

Even the stay back "three" foot rule, has been expanded to "six" foot, and, it is as if the man on the street knew more than the CDC, WTF ! many of us have been exposed just because we followed the Governments mandated guidelines.

This is not rocket science, WE WILL PICK THIS UP AGAIN TOMORROW, WITH THE ECONOMY ISSUES, BE SAFE, BE INFORMED.