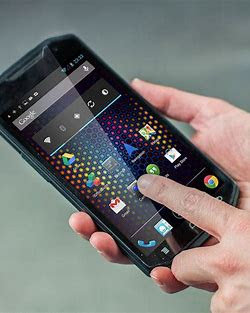 I recently sent a family member my recollections as a 7-year-old, learning about radio... and the big wooden trans-oceanic Blaupunkt that stood in my grandfather’s living room in 1950 (with its white ivory buttons and huge round dial that had every country in the world available).

The first attempt at a radio broadcast was in New York City in January of 1910, the very few... who actually had access to it, had to listen on headsets, later, the first "actual" broadcast (with an audience of one thousand listeners) was an election night broadcast made by KDKA in East Pittsburgh at 6 p.m. on Tuesday, Nov. 2, 1920. relaying the news that Warren Harding had beaten James Cox in the Presidential election.

The number of radio broadcast stations surged from five in 1921 to 500 by 1924, and by 1930, more than 40 percent of all American households owned a radio, by 1940 that number had more than doubled, to 83 percent.
After WW2 there were other media forms rising and radio fell on hard times.
In 1950 Television came into play, plain paper copiers arrived in 1960, color TV arrived in 1970, 1975 had newspapers and magazines at their publishing peak, then... in 1995, the Internet came along, we here learned to code and went up with three websites in 1992...  tactserv.com whazammo.com and haikubyanya.com
During the late '90s, smart technology, and Personal Digital Assistants began merging with cellular phones, and by  2007 the iPhone debuted.
By 2015, here is how the media world looked. 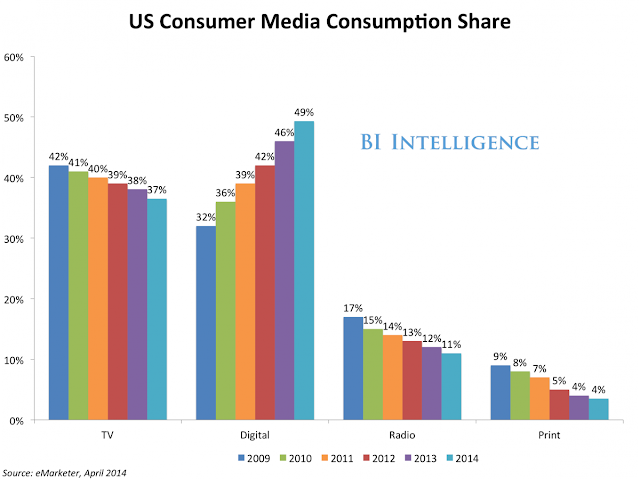 For 2020 this graph has every category dropping lower EXCEPT the television digital...TV is down to about 33%,  Radio is around 10%, and Print has continued to drop to 3%, while the digital has surged to around 55%.

Myself having been in one area or another of "media" since High School, I have endured these changes and rolled with the times (I should say EVOLVED) with the times, but 2020 presents some all-new problematics.
In 2020, I am still web mastering four large websites, and "trying" to move into podcasting, I have spent all of 2019 waffling and researching .. as to what to do.  Smartphones and Tablets have upended the entire media circus top to bottom,...here is what I learned.
(Source: eMarketer)and (https://www.websitehostingrating.com/internet-statistics-facts/)
In 2018 nearly 1.56 billion Smartphones were sold (and only 94.4 million desktops), during 2019 we spent more time on the internet than on TV for the first time in history.
In 2019 the daily average usage of the internet among US adults was 3 hours 35 minutes a day, on the average  2 hours and 15 minutes per day of that was spent on social media networks of some type, with videos/images/movies/TV accounting for 80% of all traffic on the Internet.
In 2020, 91% of people in the United Arab Emirates access the internet on their phone, followed by Singapore at 88% and Saudi Arabia at 86%, the United States is only at 57%.
About 53% of all emails are opened on mobile devices, but the average reader attention span in 2000 was 12 seconds, this year (2019) the average attention span is just 8 seconds, the use of mobile devices, multiple tasking distractions, short-form Twitter and texting, and trending to non-personal interface are considered as causes.
As of January 2020, there are over 1.74 billion websites on the Internet. but, 75% of people never scroll past the first page in search results 40% of consumers will leave a page that takes longer than three seconds to load.
And 79% of shoppers who are dissatisfied with site performance say they’re less likely to ever purchase from the same site again, 47% of all online orders include free shipping.28% of online shoppers will abandon their cart if the shipping costs are too high, or if they do not qualify for free shipping, or shipping costs shown too late in the purchase process, online grocery shopping will reach $100 billion by 2025, grabbing 20% of the total US grocery market.
But, back to radio and podcasts,  Audio content allows the listener to multitask. A recent study showed that while 49% of podcast listening happens at home, 22% happens while driving, 11% at work, and 8% while exercising.
Moving ahead... after a very long time, it is apparent that we as a society have morphed into a speedo, read-and-run, unscheduled, short attention span lifestyle, resplendent with tweeting, texting, fast foods, selfies, and poor reading comprehension.
Trying to select a format to move forward with is fraught with hurdles at every turn, although I am a writer first… storyteller second, I know from webpage analysis that “reading” does not work in 2020, and, video or images require full attention to details (like reading), which makes   "on-demand" audio look better and better, so, I am back to rethinking PortholeRadio and podcasting.
Why is this so difficult?