A diving instructor in the Cayman Islands, was with a group of divers that happened upon a gruesome sight when they found hundreds of decomposing sharks and other sea creatures tangled up in a solid ghost-net of dead, decomposing fish and sharks. 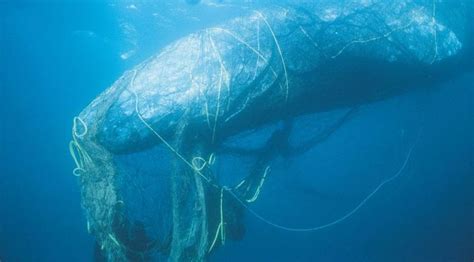 "At first we thought it was a log, but as we got closer we could see it was a net with floats, I jumped in the water first and was shocked at what I saw. It took my breath away — the first thing I saw was the juvenile oceanic whitetip shark."

"I got my buddy who was with me to grab a knife and jump in," he continued. "We did what we could to free some of the trapped life but most of it was already dead."
Despite the team's best efforts, Martin-Mayes said he and his friends had to stop the impromptu rescue for fear of becoming trapped in the net themselves.
"The net's sole purpose in life is to kill, you get your hand wrapped in it and you drown."
Thankfully, fisherman Charles Ebanks later rediscovered the discarded net and towed it into Harbour house marina, where it was successfully lifted out of the ocean, taken to a landfill to await action by an international nonprofit group, which will dispose of it.
Ghost nets are fishing nets that entangle fish, dolphins, sea turtles, sharks, dugongs, crocodiles, seabirds, crabs, and other creatures, including the occasional human diver and other sea life long after they have been abandoned or lost.

The problem of ghost nets and other abandoned fishing gear is not limited to the Caymans or just the Caribbean.

The conservation group World Animal Protection estimates that around 640,000 tonnes of so-called ‘ghost gear’ is left in oceans each year. This ghost nets and gear continues to catch and kill fish and animals as large as whales. The International Whaling Commission estimates that 308,000 whales and dolphins die annually due to entanglement in fishing gear, and marine debris.

Current studies suggest that at least 46% of the floating debris in the Great Pacific Garbage Patch are fishing nets and related cordage. These “ghost nets” are a major threat to fish populations around the world and pose an entirely different set of challenges in any potential cleanup.

Last summer, the institute chartered the sailing auxiliary cargo ship Kwai to collect 40 tons of ghost nets and other plastic waste tagged by the transponders from the Pacific Garbage Patch.