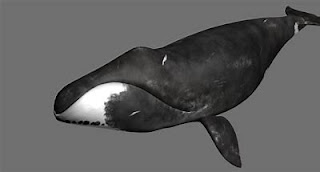 In one of my earlier articles on here, I talked about the Canadian Soldier Mayfly as having the shortest life span on earth, here we goto the opposite end, after studying 42 genes in a chemical process they call methylation that can predict life expectancy, this guy is the winner for longevity.

The bowhead is the only baleen whale native exclusively to the Arctic and sub-arctic waters. The species is named after its characteristic massive triangular skull, which is used to break through Arctic ice.

Their skulls can be over 16.5 feet long—about 30-40 percent of their entire body length!  they clock in at 75-100 tons, making them among the heaviest animals on Earth, instead of teeth, they have about 350 large baleen plates that filter seawater for eating small zooplankton. (another article earlier-on here in these pages)

They do not travel in pods like other whales and are loners, usually only with a mate, they move as rapidly in 90% ice-cover as they do through open water, and can dive to 1,000 feet, and stay down an hour at a time.

The bowhead was an early whaling target. In 2007, a bowhead was found with a fragment of a harpoon that was manufactured in the 1880s.

The population was severely reduced before a 1966 moratorium was passed to protect the species. Of the five stocks of bowhead populations left, three are listed as “endangered”, one as “vulnerable”, and one as “lower risk-conservation dependent.”

While the bowhead may be the longest-lived mammal, it stays in the Arctic waters and is not a part of mainland US whale watches.

Apparently, the secret to a long life is to swim in cold water which dramatically slows the rate of metabolism reducing the rate of cellular decay, making those Polar Bear Clubs in Minnesota that we used to rent ice saws to valid.

Me?
nothing beats submerging into a bathtub full of crushed ice for enjoyment !