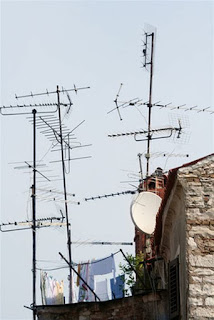 After your crystal set wore out, and before your having a car radio . . . you most likely moved on to a hand-held transistor or tabletop radio that had AM-FM (just like your crystal set, but, a lot more stations), back in the 1950's/1960's this was an equivalent (sorta-kinda) like having either a laptop or a desktop computer.  Between Television being new to the scene, FM radio coming of age, 45 rpm records booming, and "Stereo"  sound systems becoming a popular item . . . technology was on a roll.

This was a period in time when we all became aware of rooftop and rabbits ear antenna designs, radio/TV signal frequencies, microwaves, amplitudes and interference, it set the baseline for us to years later learn about all types of radio wave communications, 3G cell phone (etc.), Bluetooth, GPS, satellite dishes,  remotes, key guards, police radar, automatic devices of all kinds and WiFi. (in short terms, none of it is as black Art, mumbo-jumbo, or mysterious to us today, as it was 50-60 years ago).

For years, our old "Ma Bell" land-line telephones were the only "two-way" method anyone had available, but it was a "wired" system, when cell phones came out, they were our common-man first radio wave two way, CB, Walkie-Talkies, and email was next, but, these all rely on the same through-the-air radio waves we have come to require in our daily lives for wifi, and TV.

Mariners, Pilots, Emergency Services, Military, and Commercial Corporations all are very intensive two-way radio wave users, us commoners and our smartphones, TV's, computers, GPS, walkie-talkies and car radios use what is left as available, for our "recreational" needs.

For one-way "incoming" signals, with de-regulation, and the bust-up of corporate monopolies and domination, many of us have "cut the cable" and taken back control of our monthly billings, contracts and fees, Amazon, Google, Roku and many, many other ways around the system are in place, even the DIY satellite dish builder and homegrown antenna builder have added to the trending away from corporate control.

So, like we used to have $150.00 a month long distance phone bills, and be charged for dial-up, or forever paying for a dish, or a landline phone, renting their decoding box routers, signing long term contracts, and enduring wired-in wifi, which was not only expensive but poorly tech supported as well... thank goodness all of that is now obsolete in 2019.

When looking further  at incoming (one-way) radio signals . . . in 2019 we are back to over the air (like crystal or foxhole radio), with wifi hotspots, free public wifi, courtesy store wifi, over the air TV antennas, and Roku, Google, Amazon . . . here in America, the UK, Australia, India and even in Russia, only rural dwellers are still ensnared by some local ISP company who "controls and throttles" your telephone and wifi signal use, by choking your broadband width  (the intentional slowing of your internet service by an Internet Service Provider to actively limit your upload and download speed rate) on TV or computer data downloading.

In Part Three, we will look at how these incoming signals are throttled (TV, WiFi, Internet) here and abroad, and why,  the companies "who" have done it (and gotten caught), and how to see if it is happening to you, we will take a look at the FCC, OFCOM, CE, and the BEREC insight knowledge (the same Organizations that control Global Marine communications), plus explore some  International Institute of Communications "fix it" options, and examine the copycat deniability scripts used by Communications suppliers worldwide.

Corporate Commercial Fishing and Cargo Marine Communications Personnel (licensed radio Operators) usually attend the Pearson competence seminar here (in both video or slide show Powerpoint), and tested before ever leaving port on a factory vessel, this stuff is not as simple as just "keying" a mic and talking while at sea.