Many people confuse So...fea's name as being some kind of woman's name, like "Sofia'... it is not.

The Scottish Maritime Museums use of gender-neutral references rather than "he or she" has been in force after vandals scratched out all ships references to “she” have on museum displays. the more than 280-year-old publication "Lloyd’s Ships List" has also begun referring to ships as “it” rather than as “she” since 2002.
Museum goers have expressed their feelings on social media “This isn’t how it works, you don’t get to erase history, and like it or not ships have always been referred to as she" . . . .  or have they?

In Dutch, the word for ship, schip, is a neuter noun making the pronoun “it.” The same is true in German, schiff, and Norwegian, skip. In Greek ships are also “it.”

In Dutch and German the words for boat are also neuter nouns.  On the other hand, bootsfahrt, a boat trip, is feminine. In Norwegian, while ships are “it,” the word for boat, båt, is masculine, so the pronoun is “he.”
In French, most words for ships or boats are masculine, including navire, bateau, and, vaisseau.  In Spanish, words for ships are both masculine and feminine so ships can be either “he” or “she” depending on the word you use. Barco and buque are both “he,” whereas nave and embarcación are “she.”
Western fleets have dominated the world of shipping and sailing for Centuries, Britain did so during past centuries, and the United States did in the 19th and 20th centuries, so, a case might be made that English speaking traditions should be maintained.
One has to fully "understand" the male double-standard, reverse entendre, and pub/street level sarcasm and derogatory usage to properly interpret sailor-talk, the presence of a real woman on board a ship has been considered bad luck since ancient times, yet we name most of our boats after women, have "maiden voyages", and have tattooed their names on our bodies and mounted bow sprit figureheads of women on almost every ship built ? 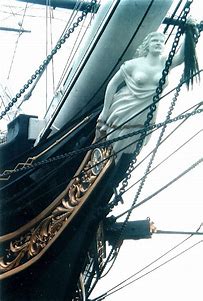 In many Navy wardrooms and Officers mess' (Oz, Limey, and Yank), I have seen various statements quoted on plaques:
Admiral Chester Nimitz put it more succinctly in an address: "A ship is always referred to as 'she' because it costs so much to keep one in paint and powder to keep her good looking", particularly if she is slim-waisted, well-stacked, and has an inviting superstructure".

This inexcusably salty version spoken in Navy-ese nautical terms was best said at a U.S. Naval Institute gathering by Rear Admiral Francis D. Foley on the subject:
“ Ships are referred to as ‘she’ because men love them, but this encompasses far more than just that. Man-o'-war or merchantman, there can be a great deal of bustle about her as well as a gang of men on deck,  It is not so much her initial cost as it is her upkeep that makes you wonder where you founder".
"She is greatly admired when freshly painted and all decked out to emphasize her cardinal points. If she is an aircraft carrier, she will look in a mirror when about to be arrested and will wave you off if she feels you are sinking too low or a little too high, day or night. She will not hangar around with duds, but will light you off and launch you into the wild blue yonder when you muster a full head of steam".
“Even a submarine reveals her topsides returning to port, she heads straight for the buoys, knows her pier, and gets her breast-lines out promptly if she is single-screwed. On departure, no ship leaves port asleep, she always leaves a wake. She may not mind her helm or answer to the old man when the going gets rough, and can be expected to kick up her heels on a family squall".
“A ship costs a lot to dress, sometimes blows a bit of smoke, and requires periodic overhauls to extend her useful life. Some have a cute fantail, others are heavy in the stern, but all have double-bottoms which demand attention. When meeting head-on, sound a recognition signal; whistle. If she does not answer up, come about and start laying alongside, but watch to see if her ship is slowing . . . perhaps her slip is showing? Then proceed with caution until danger of collision is over and you can fathom how much latitude she will allow".
“If she does not remain on an even keel, let things ride, feel your way, and do not cross the line until you determine ‘weather’ the "do" point is right for a prolonged blast. Get the feel of the helm, stay on the right “tact”, keep her so, and she will pay off handsomely. If she is in the roaring forties, however, you may be in the dangerous semi-circle, so do not expect much "luff," especially under bare poles"
"She may think you are not under command or control and shove off. If she edges aweigh, keep her steady as she goes, but do not sink into the doldrums. Just remember that ‘to furnish a ship requires much trouble, but to furnish a woman the cost is double!"

“To the women who now help us "man" our ships, my apologies for the foregoing. Only the opening phrase presents my true feelings. After all, a ship's bell(e) will always remain her most prized possession, and every good ship has a heart, just like yours. A trick at the wheel, like you, would have been welcome aboard when I was on "she" duty for 40 years. May God bless you all, sweetheart!”
Also, in the Aussie and British Royal Navy I have seen and heard:
Adm. Alan West, British Royal Navy  " The Royal Navy has a long tradition of referring to its ships as 'she' and will continue to do so, They're beautifully constructed. They look after you. They, in a sense, nurture you."

She shows her topsides and hides her bottom … She can be all decked out … It takes an experienced man to handle her correctly … Without a man at the helm, she is absolutely uncontrollable … boats or women, it's not the initial expense that breaks you, it's the upkeep.

Psychologists say a ship may represent a mother taking care of a human inside her womb. so when we board a ship or a vessel, we are all inside her and she takes care of us as her passengers until we are delivered safely to our next port.
Remember, not only boats and ships are called "she", but Countries, Hurricanes-Typhoons are also called “she” as are automobiles, motorcycles, etc.  but these examples are probably all extensions from our Maritime lingo.
Curiously, a ship being called a “she” is very much a Western Europe British/U.S. custom, in Russia and much of the Eastern and Asian countries, a ship is called “he”,  I do not know where this all ends up in today's social identity gender confusion, but, I will stick with tradition, "she" is always an endearing term for any object or event.

Here is a link to all the 235 U.S Navy ships has named after women:
https://en.wikipedia.org/wiki/List_of_U.S._military_vessels_named_after_women