Still in the beginning of my self-refresher from my own notes and letters about fixing my WiFi, and after posting yesterday's  "silent com" about Aldis and flags, my next pile of papers (remember this was all created before the cloud-or even the Internet), was global com(munications).

If you did not have a "foxhole", "mothers Oats" or "Crystal radio set" as a kid, or remember Grandpas multi-band intercontinental transoceanic radio by Blaupunkt, Grundig, Telefunken, Stromberg-Carlson, or Capehart (that had all of the foreign countries listed}, here is a refresher. 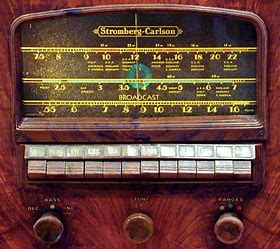 At the time it seemed perfectly worthwhile listening to a foreign language radio transmission for hours on end and searching for the farthest country you could find, it was mesmerizing, and it drove you to create a "crystal set".
Korean and WW2 war vets all knew how to build "razor blade radios", and many kits were available by Rocket, Crystal, and Remco.

A foxhole-crystal set required no power, it worked off of the air-borne radio waves themselves, its range was dependant on the antenna (explaining, the designer-engineering training and twisted minds of most 8 year-olds) the perfect "Long line antenna would be a single bare wire 597-1857 feet long,  I used the downspout outside my bedroom, but those continuous grape arbor wires were the best.

We all mostly built these foxhole razor blade radios with a pencil stub or safety pin tuning... 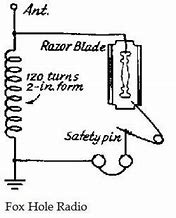 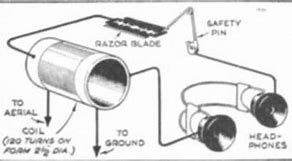 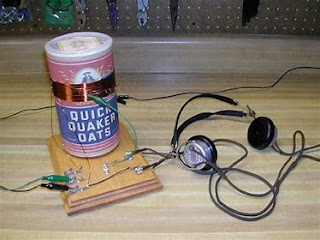 Creating the headphones from an old telephone earpiece really did not work, making the headphone the most exotic, costly, and hard to find component... with the many "kits" being made, I got a two-ear set from a Rocket set, living 20 miles outside of the public square, I could get many local radio stations, but, the treats were getting KOMA in Oklahoma City KRLA in Los Angeles, and the monster XERF Tijuana midnight Rock show, Asia and Europe talk radio would come in as a rarity.

This era is important to creating a knowledge base about antenna design and learning about  am/fm frequencies, it is a pre-cursor to entering the two-way world of HAM radio, I mention the TransOceanics as a "bait" for trying out the Crystal radio attempts... expanding the world we live in, opening a huge door to becoming inquisitive and instilling research followed by design. Now "old-school" stuff ignored in our Internet-satellite-digital world.