We have spent the last month talking about rivers and ice, Ducks, floods, runaway barges, balloons, plastic, sneaker waves, sea birds and such, but, we are not done yet!

Living on a river adjacent to the sea means that tidal flows create an exchange of salt water and fresh, not all sea creatures, and not all river creatures can tolerate the repeated  salt/fresh water change for very long periods of time . . . enter the Kappa: 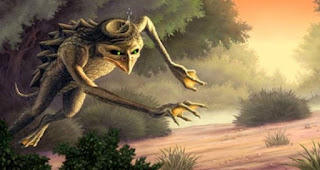 Many are not aware of our Japanese ties and history, a few weeks ago, at a formal onboard So...fea poetry luncheon, we received notice of an’ya’s monster Tanka Poetry win in the UK (see the 26 MARCH entry), which evolved into a full-blown celebration, a poetry visitor onboard inquired about our little bronze statue that stands in our bronze suiseki doban, and, that began an afternoon of many questions … so, here is the full story:

This rare Japanese bronze 3" statuette sitting in our suiseki doban container is
called a “Kappa”, (a “river Imp” or “water-child”), shown here drinking from a gourd. 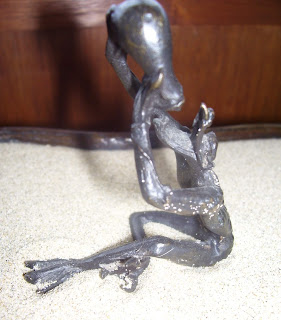 Coming from ancient Japanese folklore, Kappa are depicted as being physically about the size and shape of an 8 year-old child, or large monkey, Kappa walk erect, and are in human configuration (two eyes, arms, legs, head, neck, feet hands, etc) they live around/in rivers and ocean estuaries and large bodies of water, have webbed feet and hands, and a beak for an upper lip, their green skin resembles that of a frog, they have a bowl-like depression on top of their skull (their sara), that retains water (the source of the Kappa's power or life force when they venture ashore), if its liquid is spilled, the Kappa is severely weakened, or will die.

Some Kappa have turtle-like shell casings on their upper back, some are also hairy, they swim like, and smell like fish, they love cucumbers, some say their arms are connected to each other through the torso, and can slide from one side to the other. 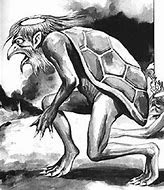 There is matching folklore throughout all of Asia and Eastern Europe. The Chinese "Shui Gui",

or water monkey, the Kelpie of Scotland, the Neck of Scandinavia, the Siyokoy of the
Philippine islands, the frog-faced Vodyanoy known in Russia, and the Vodnik in the Czech
Republic and Slovakia. 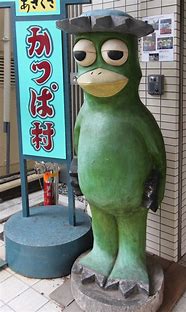 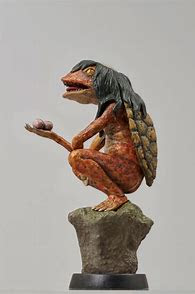 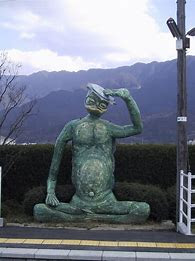 Kappa stories range from funny to terrifying, often accused of assaulting or kidnapping humans
(especially children), and stealing horses and cattle that venture near the river, they are seen as mischievous troublemakers or tricksters with pranks ranging from relatively innocent to the malevolent, such as raping women and at times eating human flesh.


Folk beliefs claim the cucumber as their traditional favorite meal, offerings of cucumber are frequently made to the Kappa at festivals and picnics, there used to be a tradition where people would write the names of their family members on cucumbers and set them afloat into the streams to mollify the Kappa and prevent the family from ever coming to harm near, or on the rivers, 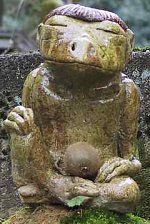 In some regions, it was customary to eat cucumbers or a cucumber-filled sushi roll is known as kappamaki "before" swimming as a protection, but in other regions it was believed that that act would guarantee an attack, still today, signs warning about Kappa are found all over Japan in many Japanese towns and villages around bodies of water. 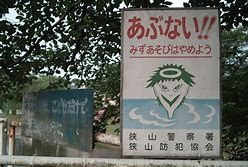 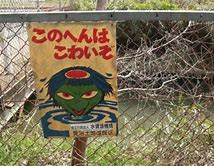 Kappa are obsessed with politeness and human tradition, and are considered to be extremely trustworthy and honest, so if a person makes a deep bow, it will return the gesture, this results in the kappa spilling the water held in their head "dish" (sara), rendering it unable to leave the bowing position until the bowl is refilled with water from the river in which it lives. If a person refills it, the kappa will serve that person for all eternity.
A similar weakness of the Kappa involves its arms, which can easily be pulled from its body. If an arm is detached, the Kappa will perform favors or share knowledge in exchange for the arms' return.
Another method of defeat involves sumo wrestling: challenging a kappa to wrestle is easily used to encourage the Kappa to spill the water from its sara. Kappa have an aversion to iron, sesame, and ginger. Kappa evolve too ! later generations have a cap to cover their sara with so it will not spill.
So, that is far more than you wanted to know about Kappa, but, now you are warned, rumor has it that they migrated here from the Japan Tsunami on flotsam. 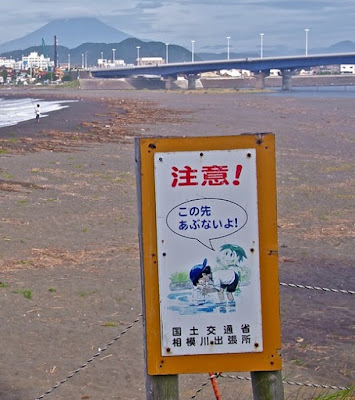