More grey and rain 45-50 warmer degrees though...
BALIKPAPAN, BORNEO INDONESIA
Last Saturday, a fire broke out near the Panamanian flagged (Chinese crew) Coal ship "Ever Judger" at Balikpapan Bay, Borneo, Indonesia. Two individuals -  fishermen - were killed, and one of the Judger's crewmembers suffered burn injuries. All 20 members of the Judger's crew were successfully evacuated. Indonesian police are questioning the crew as the oil continues to pollute local waters. 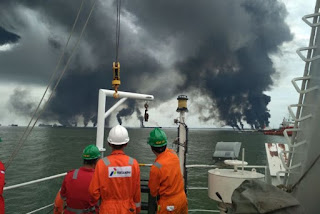 Last Friday,, when oil began spilling into Borneo’s Balikpapan Bay, the oil  spread to cover an area of nearly 13,000 hectares and pollute 60 km of coastal ecosystems, including mangrove wetlands and a marine mammal habitat where at least one protected dugong was killed, and it has destroyed the areas fishing industries. The spill created an overpowering stench sweeping across Balikpapan, a city of 700,000 people.
Where did the oil come from? For the first four or five days, there was only denial and finger-pointing.
The only oil refinery in the area is owned by the Indonesian state-owned oil company, Pertamina.
Pertamina officials denied that the refinery or its pipelines had anything to do with the spill. They said that testing of the oil indicated that it was marine fuel and not crude oil from their facility. Balikpapan is a busy port serving one of Indonesia’s biggest thermal coal mining regions. Nevertheless, there were no reports of ship casualties which might have caused a such a large spill. Local police questioned the crew and took fuel samples from the MV Ever Judger in Balikpapan Bay. The samples were sent ashore for analysis.
For the next several days, the refinery, Pertamina Unit V, continued operating as usual while the spill continued to grow. Finally, on Wednesday, the oil company was  identified as the source of the spill —  a cracked 20-year-old underwater pipeline from to its refinery in Balikpapan. Pertamina says its sonar equipment revealed the punctured pipeline had been moved 100 meters from its original position.
The oil company is now suggesting that a bulk carrier loaded with coal may have snagged the pipeline with its anchor. Reuters quotes Oil and Gas Director General Djoko Siswanto: “We suspect the pipe was dragged by the ship that caught fire. At the time it was bad weather, so they had to drop anchor,” Siswanto said, noting it was an area where ships were not supposed to anchor.