45 degree days-nights grey, no wait !!  sunny, correct that ....its a gale,  hail, rain, sleet, wind white caps in the bay....  like living inside a cocktail shaker here at A dock. The picture is Rhody days  18-20 May, see the rides up on the boardwalk !!  OUR ONE YEAR ANNIVERSARY OF BEING HERE IN FLORENCE (Port of Siuslaw) is on 15 April.... 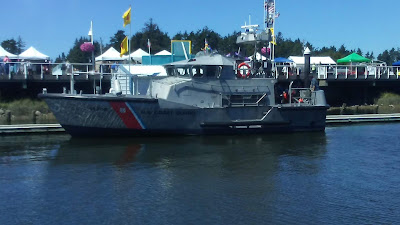 Up in Seattle,  the Washington State Ferries are deeply concerned about bicycles...you know, those sitting on deck when you pull into port and all the cars have unloaded .... where are the riders?   overboard?

The Coast Guard says "In the last 18 months, 12 bicycles have been left aboard ferries", does this mean that the owner could have gone overboard?

Legally, and responsibly, until the bicyclist from the bicycle can be confirmed safe, there ought to be a search undertaken. A bike recently left aboard a vessel led to a $17,000 expense (in helicopter and crew costs) searching for a missing person along the ferry route when, in fact, no one had fallen overboard.

“When bicycles are left behind on a ferry, the Coast Guard assumes the worst and searches in the event the bicycle operator may have fallen overboard,” explained Captain Linda Sturgis, commander for the Coast Guard’s Puget Sound sector, in a statement. “We join the Washington State Ferry system in requesting that bicycle users not bring rented bicycles on board the ferries, instead, leave the rented bicycle at the pier and board as a walk-on passenger.”

Sounds like a real problem, huh?  when we lived up there we questioned the car coming aboard with 5 people, leaving with three ....?  and notice they do not tell you about the cars left on the ferries... as a local you have this great way to dispose of a unwanted car..... go onto the ferry.