Great ! wind storm yesterday-late and evening.... the California storm center was off our coast, and we had lightening-thunder-wind gusts to 40, and lotsa'rock-n-roll all night long !  trying to clear this AM though....

Only 100 females of breeding age remain, and only five calves were born in 2017. And at least 17 right whales died last year.
New threats to their space like seismic airgun blasting and offshore drilling impact the very survival of these critically endangered whales.

During the process to locate oil and gas deposits below the seafloor, seismic airguns shoot explosive loud blasts of compressed air into the ocean every 10 seconds, 24 hours a day, for days to weeks on end. 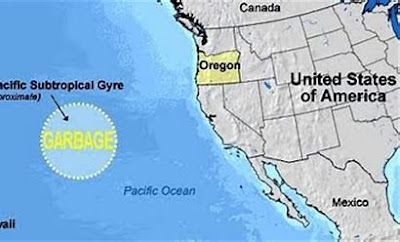 The immense mass of predominantly plastic waste floats halfway between California and Hawaii, as a large part of the more than five trillion pieces of plastic garbage currently polluting our planet’s most precious resource.
The Ocean Cleanup Foundation has spearheaded the recently published research, explaining that the wind and convergence of ocean currents are what gather so much of it into one place.
The “patch” contains more than 1.8 trillion pieces of garbage and weighs approximately 88,000 tons. That is the rough equivalent of 500 jumbo jets — and more than 16 times the size of previous estimates. It has nearly doubled the size of Texas — and is bigger than France, Germany, and Spain combined.
The study required three years of careful mapping, a team of scientists, six universities, and even a company that develops aerial sensors. And it only covered this single largest island of pollutants — there are four others floating around, waiting on the same level of scrutiny.
There is urgency inherent to the project. For now, the plastics are largely gathered in these centralized locations. However, tiny pieces are constantly breaking away and, every day, make the oceans more dangerous for continued marine life. If left unattended, there is no educated guess as to how long the process could continue.


The Ocean Cleanup Foundation’s spokesman, Dubois, called it “a ticking time bomb of larger material.” He emphasized that “we’ve got to get it before it breaks down into a size that’s too small to collect and also dangerous for marine life.”