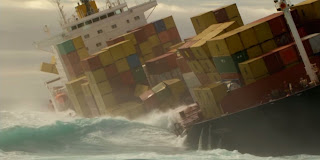 This morning the US Coast Guard released an announcement that “70 stray cargo containers pose a threat to mariners off North Carolina.”
The Maersk Shanghai has lost approximately 70 to 73 cargo containers due to high winds and heavy seas on Saturday.

The problem with 40 foot steel shipping containers is that some do not sink, but can float mostly submerged like an iceberg, for an extended period of time.

Estimates from the World Shipping Council (WSC) about loss reported from shipping companies of containers,  says more than 100 million containers are transported across the globe annually, but  relatively few are lost over the side.

So, how great a risk are floating shipping containers to us mariners? Realistically, the chance of hitting a container at sea are very small.

That being said, containers tend to float just above the surface and can do major damage to sailboat or fishing vessel, on auto pilot or not, at night.