Over the past few months, we have posted a number of "washed up on shore" marine sea life articles sent to in us, they all seem to either baffle the local "experts", or end in some sort of lame explanation that is not very scientific in logic. Here is another . . .  Nessie ?
But not to worry, although experts have so far been unable to positively identify the animal from either the photos and video footage, remember our "Sea pickles" and UK starfish knee deep deaths, NOAA and the government paid researchers are so far off their marks, and so unscientific and secretive it really alarms us.

More about this deception over on the whazammo.com/sea genus page and on the Porthole Podcasts radio show. 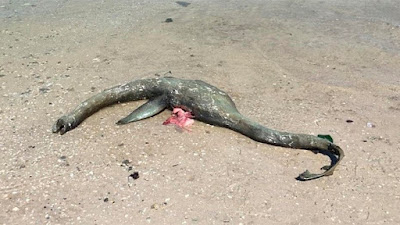 Dan Ash, director of the Fish and Wildlife Service, Wolf Island, Georgia says "some sea animals have a way of decomposing where they can resemble a prehistoric creature.